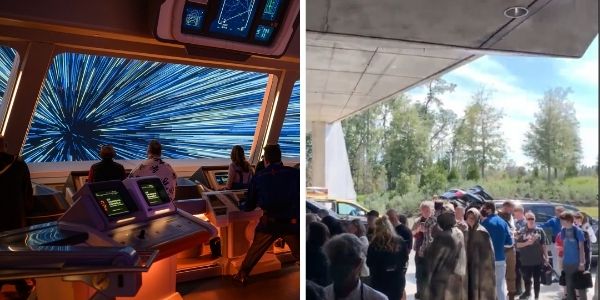 While there are so many exciting things currently happening or about to happen at the Walt Disney World Resort such as the upcoming TRON roller coaster at Magic Kingdom or Guardians of the Galaxy: Cosmic Rewind at EPCOT, none really compared to the level of hype and ambition Disney’s new Star Wars: Galactic Starcruiser.

The long wait is now over and Guests have already traveled aboard the Halcyon Starcruiser at Walt Disney World. Boasting some out-of-this-world theming, interactive characters, and some truly unique food, this new immersive resort has been getting some pretty positive reviews despite the whopping $6,000 price tag.

However, there are some elements Guests aren’t too thrilled with at the moment. In a tweet from Belle (@FiBelleFi), they noted how the arrival process was less than desirable as everyone was forced to crowd around outside the entrance. See the full tweet below:

Why didn’t they build an arrivals lounge? Everyone could sit and they could call each family 1 by 1. Nobody greeted me from my car to check me in, they were so busy I had to find a CM to check in. High price = high expectations

Why didn’t they build an arrivals lounge? Everyone could sit and they could call each family 1 by 1.

Nobody greeted me from my car to check me in, they were so busy I had to find a CM to check in.

They discussed how there was no “arrival lounge” that Guests could wait in, kind of similar to what you would find at a more typical Disney hotel. They also noted how hectic the arrival process was saying that they had to track down a Cast Member just to check-in. Hopefully, these kinks get worked out in the near future.

If you’re looking to book your stay onboard Disney’s Galactic Starcruiser, check out the official website for all additional information. On March 1st, Guests were able to board the Halcyon and experience what Disney has claimed to be one of their most immersive experiences yet. As stated earlier, this experience does come at quite a cost.

Guests will also have the chance to disembark the Halcyon and enter Star Wars: Galaxy’s Edge in Disney’s Hollywood Studios. The Star Wars-themed land is set between Star Wars: Episode VIII – The Last Jedi (2017) and Star Wars: Episode IX – The Rise of Skywalker (2019) in the Star Wars timeline. Guests will be able to visit Batuu and ride two of the most incredible rides at Walt Disney World, being Millennium Falcon: Smugglers Run and Rise of the Resistance.

Will you be staying aboard the Halcyon Starcruiser anytime soon? Let us know in the comments below.