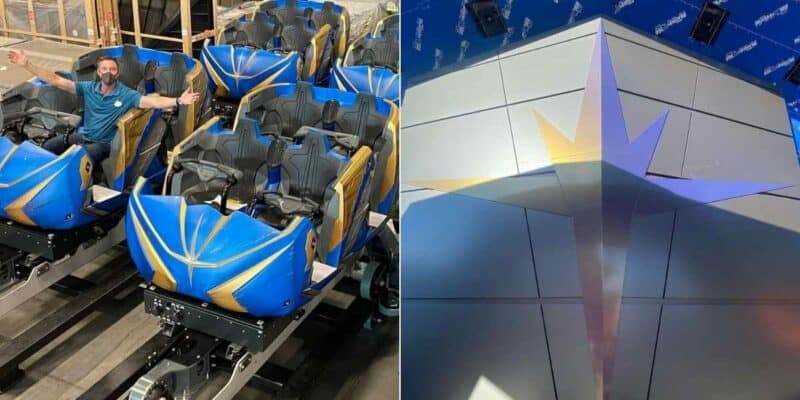 The highly-anticipated EPCOT coaster has been the center of Disney Park news recently, as the Walt Disney World Resort is preparing to welcome the new Guardians of the Galaxy: Cosmic Rewind in the World Discovery portion of the Park. Today, we’re seeing a first look at a new milestone for the incoming attraction.

The Marvel Cinematic Universe will soon be arriving with Marvel’s Guardians of the Galaxy as the theme behind Disney’s Cosmic Rewind attraction which is filling in the former location of Ellen’s Energy Adventure. At the recent Destination D23 Expo, Disney announced Cosmic Rewind will be opening in Summer 2022, after being delayed due to the pandemic closures. While we have yet to receive an official grand opening date for the Disney coaster, we’re thrilled to see the structure take shape and additions to the main facade of the pavilion now revealed.

What color is this star? Is it gold…is it purple….a bit of both? Today, the first sign of Xandar’s arrival to EPCOT appeared at the Wonders of Xandar pavilion. Xandar and the Nova Corps are coming to EPCOT to share their culture and technology and this star is frequently used by them in everything from their architecture, spaceships, uniforms and more. This very unique color shifting material gives a dynamic quality to the main facade of the pavilion and represents another iconic milestone as our team continues toward a Summer 2022 launch of this new centerpiece of our EPCOT transformation.

RELATED: Disney Is in the “Final Stages” of NEW Guardians of the Galaxy Ride!

It’s great to see progress with this new star milestone! Disney Parks Blog previously shared that work continues to be made on the “Omnicoaster”:

Work also continues on Guardians of the Galaxy: Cosmic Rewind – the family-friendly “storytelling coaster” featuring a groundbreaking ride system with vehicles that rotate 360 degrees and can even do a reverse launch!  The Omnicoaster is a first- of-its-kind programmable roller coaster ride system, where guests can be rotated along the ride track in any direction while traveling at high speeds. The Omnicoaster name builds upon the tradition of the Omnimover ride system in which Walt Disney Imagineers are able to turn guests in any direction and focus their attention on a specific scene or element.

RELATED: Inside Look at Guardians of the Galaxy: Cosmic Rewind Track

While we’re enjoying EPCOT’s newest attraction, Remy’s Ratatouille Adventure located in the France Pavilion of the World Showcase, we know Cosmic Rewind will take the EPCOT experience to a new level for Disney Guests!

Do you like the first look at the new star facade for the attraction pavilion? Let us know in the comments!