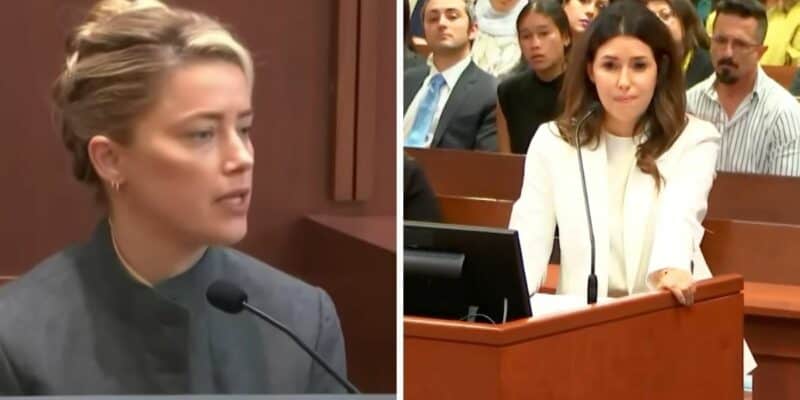 Amber Heard, 35, (Aquaman, The Rum Diary, Drive Angry Piper) took the stand the last few days for her testimony. During her testimony, Johnny Depp’s team backed Ms. Heard in a corner during the cross-examination.

Mr. Depp is currently suing his ex-wife, Amber Heard, 35, (Aquaman, The Rum Diary, Drive Angry Piper, and more) for defamation after she wrote an op-ed for The Washington Post, where she referred to herself as a “public figure representing domestic abuse.”

During her cross-examination, Camille Vasquez, one of Depp’s lawyers, did not hold back when asking Ms. Heard questions.

For example, Ms. Vasquez was able to prove that Ms. Heard lied under oath Depp’s 2020 libel case in the United Kingdom. The actress claimed multiple times that she had donated the entire divorce settlement to charity, while she was under oath. However, when Ms. Vasquez cross-examined on Monday, May 16, Ms. Heard finally admitted to failing to pay her pledged $3.5million donation to the ACLU after she previously claimed to have made the donation.

Ms. Heard then proceeded to blame Mr. Depp for not being able to donate that money because he sued her.

“You were not scared of him at all were you?” Ms. Vasquez asked Ms. Heard while she was on the stand in Fairfax County, Virginia, courtroom.

Ms. Heard seemed a bit frazzled and taken back, and as she turned to the jury instead of looking at Ms. Vasquez, the Aquaman actress said “This is a man who tried to kill me, of course, it’s scary. He’s also my husband.”

She added, “Johnny is not an accurate historian of what happened during that period of time, I’ll guarantee you that.”

Vasquez continued to grill Ms. Heard throughout both days of cross-examination. She questioned the Aquaman actress about her own drug use as well as other allegations made against Mr. Depp. Ms. Vasquez then accused Amber Heard of editing a photograph that shows her with a red mark on her face.

Amber Heard’s testimony came to an end on Tuesday, May 17.

The Johnny Depp vs Amber Heard defamation trial will continue today in the Fairfax, Virginia courtroom.