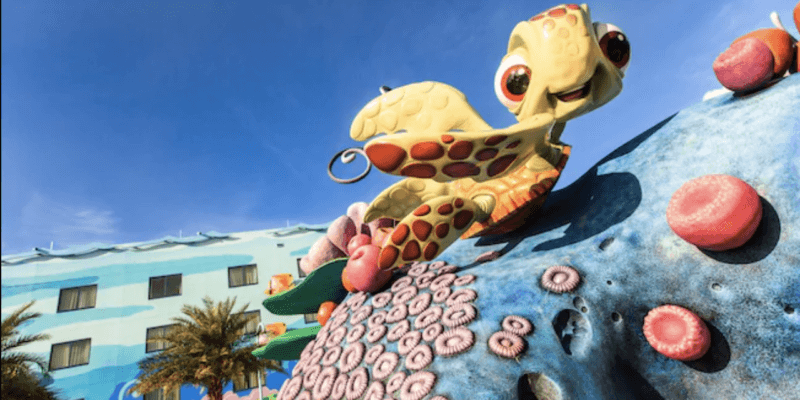 If you’ve ever stayed on property at Walt Disney World Resort in Orlando, Florida, you know there are dozens of hotel options available for Guests in all demographics.

From sumptuous Disney Deluxe Resorts like Disney’s Grand Floridian Resort & Spa and Disney’s Polynesian Village Resort to affordable Disney Value Resorts like the All-Star Resorts and Disney’s Pop Century Resort, there is somewhere for every group of vacationers who comes to experience the magic.

Now, some Guests have taken to social media to express their opinions about Disney’s Art of Animation Resort. This Resort hotel, while technically classified as a Value option, has more in common with some Disney Moderate Resorts — like Disney’s Caribbean Beach Resort and Disney’s Port Orleans Resort — in regard to theming elements.

Redditor xTATEUMSx started the thread with a compliment accompanied by a gorgeous photo of Art of Animation’s eye-catching lobby:

I know some people dislike value resorts, but I think everyone needs to experience Art of Animations lobby at least once.

I know some people dislike value resorts, but I think everyone needs to experience Art of Animations lobby at least once. from WaltDisneyWorld

It didn’t take long, however, for other Disney Parks fans to begin complaining about some of the Resort’s features — or lack thereof.

edd129 is decidedly not a fan of the “hell hole” Resort, noting that they would rather make their children “sleep in the bathtub” at a Deluxe Resort than book another Art of Animation stay:

I’m here right now — family of six. My wife talked me into this hell hole. The cost of a deluxe with the perks of a value resort (ie, none).

Next time we will either make the kids sleep in the bathtub of a deluxe or get two connected rooms somewhere else.

Another user chimed in with similar thoughts, noting:

We stayed in January and personally I didn’t care for it too much aside from the Skyliner access. Even the cheapest 6 person family suites are more expensive than 2 connecting 4 person rooms across the lake at Pop. Felt like we were paying Moderate prices for Value amenities.

Wolverinero79 wrote, “Oh for sure, if you don’t have kids, don’t stay at AoA,” pointing out that Art of Animation — with the largest pool and splash zone on Walt Disney World Resort property — is definitely a family hotel, and may not be the right choice for those who don’t have young children.

ElderberryKiwi explained the difference between Value and Value Plus Resorts for those who may be unfamiliar:

Yeah it’s technically a value but “value plus” because of the better theming and family rooms that the all stars lack. Still a value though, so no restaurants or slides. Oh and values have 1 bus stop for the entire resort.

A user going by BubbleGumeJonz shared a complaint about crowd levels, which is certainly timely given that many Disney World Guests have shared tales about wildly crowded Parks lately:

I did experience that lobby, but my experience wasn’t great. We went to check in and the lobby was absolutely jammed packed. Like hardly any room to walk through with your bags. It took forever to check in. No fault to the cast members though, they were amazing. There were just so many people. It kind of put me in a funk. The restaurant was equally packed for our whole stay, which was during value season 2018, so I can’t even imagine what it would be like during peak times. Totally turned me off values. The rooms were so cute and the pool was nice, but it was just too big with too many people.

It is worth noting that the social media thread also features comments from plenty of Guests who agree with the original poster that Disney’s Art of Animation is a great Resort that is perfect for young families looking for amazing theming without a high price tag.

The official description of Disney’s only animation-centric hotel reads:

Be surrounded in the artistry, enchantment and magic of Disney and Pixar movies. Stay at a Disney Resort hotel that invites you to explore the storybook landscapes seen in such classics as Finding Nemo, Cars, The Lion King and The Little Mermaid. From delightfully themed family suites to wondrously detailed courtyards, Disney’s Art of Animation “draws” you and your family in to become a part of some of your animated favorites.

What do you think about AoA and other Value Resorts?