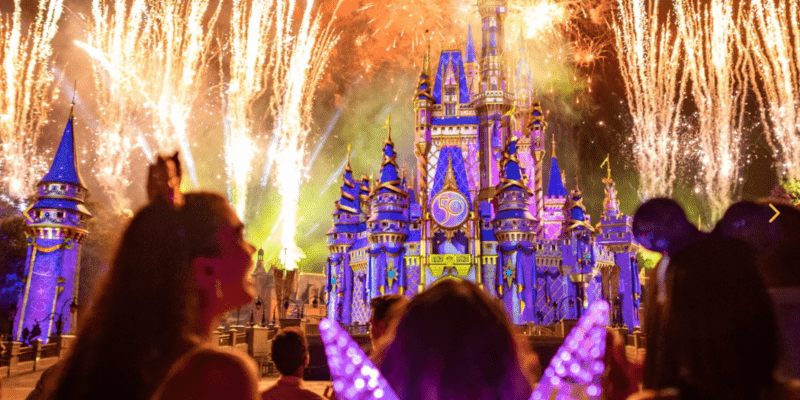 If you’re visiting Walt Disney World Resort, there are typically two things you are sure to encounter: Magical experiences and crowds.

Disney World began slowly phasing back in nighttime spectaculars last year, introducing Disney Enchantment to replace the former Happily Ever After fireworks show at Magic Kingdom, and Harmonious at EPCOT.

At this time, Fantasmic! has yet to return, but Disney did share that the beloved nighttime spectacular at Disney’s Hollywood Studios will be back this year.

If you’ve ever been to Magic Kingdom for Disney Enchantment or the former Happily Ever After, you know that crowds gather all throughout Main Street, U.S.A., Liberty Square, and down the streets of the Disney Park to get a glimpse of Cinderella Castle as the magical story unfolds.

One Walt Disney World Resort Guest has seemingly found a way to beat the crowds, but it’s a way that takes much skill and perfect timing.

User U/cedwards13 shared a photo in a recent Reddit thread watching the fireworks at Magic Kingdom from the attraction Big Thunder Mountain Railroad.

Far less crowded way to watch the fireworks! from WaltDisneyWorld

It’s an absolutely stunning view and we at Inside the Magic can attest to both Big Thunder and Splash Mountain being perfect attractions to view the fireworks, if you’re lucky enough to board the attraction at the perfect time.

To time this perfectly, however, you’ve got to know when the nighttime spectacular starts and be prepared to be in line sometimes as soon as an hour before the show is set to start, depending on the attraction’s wait time.

Still, if you ever get a chance to view Disney Enchantment while riding Big Thunder Mountain Railroad, the attraction will likely become one of your instant favorites and it will be an experience that you certainly won’t forget.

What do you think of this “fireworks hack” at Magic Kingdom? Let us know in the comments!