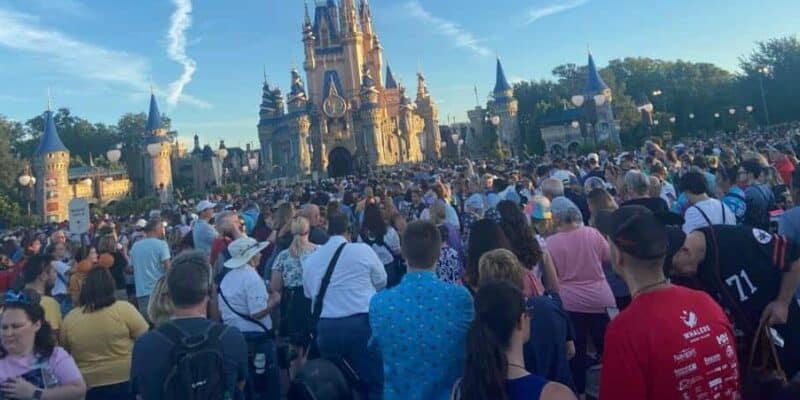 If you have been to Walt Disney World Resort as of late, you likely realized that whether you are visiting Magic Kingdom, EPCOT, Disney’s Animal Kingdom, and Disney’s Hollywood Studios, that the Parks are often packed with people. When the Parks reopened in 2020 we saw a lull in Guests as there were very few who were traveling as well as Disney has a very small capacity limit.

Disney CFO Christine McCarthy participated in a Q&A session at the Morgan Stanley’s 2022 Technology, Media & Telecom Conference. At the conference. McCarthy noted a few things that piqued the interest of many Disney fans. She stated that Park’s capacity would never return to normal.

Now, it seems Guests are looking for ways around the crowds, and trying to come up with new ways for crowd control. One Disney fan took to the internet and asked:

Given the disdain for the current reservation system, as well as the obvious demand for admittance to the parks, tell me: In your minds, what would be the ideal system for keeping attendance and crowds manageable? Because the current system is obviously disliked.

The question garnered of a ton of responses with Guests suggesting alternative options. One Guest stated:

Made a random thought start in my head. What if Disney started offering perks to switch guest to parks that are estimated to have lower attendance on that day. Kinda like how airlines have to bribe you to leave your seat when they overbook.

Like if I got a alert the day or so before on MDE saying “would you be interested in switching from MK tomorrow to AK?” And they threw in like $50 in food rewards and like a extra LL or two, or whatever really. It probably wouldn’t work on me every time, but I would definitely do it sometimes.

This cost them pennies on the dollar really. And now they get to more evenly distribute guest everywhere.

Another Guest actually thinks that the Parks are less crowded now due to the Park Pass Reservation system.

I hate reservations with a passion but looking at other comments I think I’m in minority thought here that I feel that the parks are less crowded now with reservations.

Like this past weekend all parks were full but I never waited that much in line and it never felt over crowded outside of fireworks at magic kingdom time and evening at Epcot…. Like Saturday evening we hopped to Hollywood studios and it felt freaking empty. We ate at baseline tap house for dinner, all tables were open, we grabbed food at backlot express to bring over to the tap house, literally empty. Prime dinner time…. If we had wanted to no wait for docking bay. … if anything they just need to make Hollywood and AK more desirable in the evening to disperse the crowds.

Another Guest suggest charging admission to young children who currently enter for free:

Someone mentioned in another thread about charging admission for kids 3 and under. It would obviously make parents mad, but it would delay parents from bringing their toddlers on repeat visits. Less strollers, more space overall.
Disney would never do it, though.

One Guest suggested opening a brand-new theme park to divert traffic, which would likely be a costly option.

We’re looking at a basic supply-and-demand issue. Usually you would either increase supply or raise prices. Disney is taking an interesting approach by artificially reducing demand at the cost of literally turning away money. Of course, they could raise prices and eventually probably will. But what if they increased supply? If Disney could find a place to throw a park right between Houston, DFW, and San Antonio (the Texas triangle has a population not too far off from that of the entire state of Florida), they could probably print money with it. Good weather, lots of money, and it takes strain off of the other parks. Yeah, it will cost money to build, but let’s face it, America is obsessed with Disney. Those that aren’t are obsessed with either Star Wars, Marvel, or both. As Disney buys IPs, they grow the base of people who want to visit the parks. There just has to be a point when the crowds make a third American resort make sense.

The idea of a 5th gate was also brought up.

The only solution that would make people happy would be the addition of a 5th gate, which is expensive and takes time. Anything else will be hated. Disney is a victim of their own success.

Others mentioned charging more than they already do would likely price out many families and Guests looking to visit the Park, however, that does not sound like a great option as it would stop many from being able to visit the magic. It seems that for now, the current crowds are likely what Guests should expect to deal with for the foreseeable future at Walt Disney World Resort.

What do you think of the current crowds at Disney? Do you have any crowd control ideas?