Guest Aggressively Slapped Disney Character and Was Immediately Removed, Banned From Park - Inside the Magic 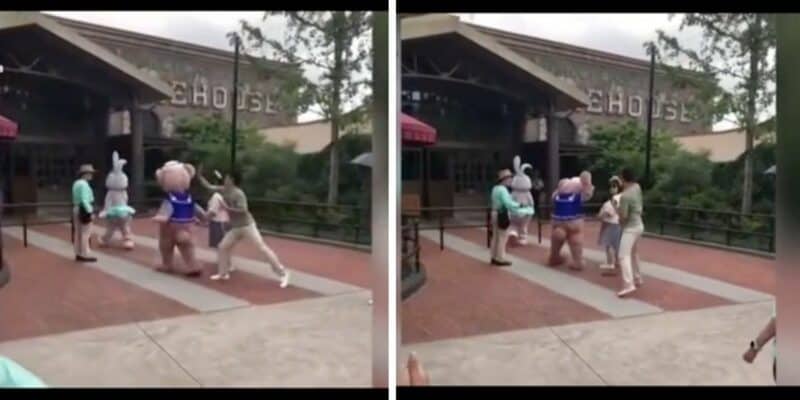 Guests should never touch Disney characters without consent from Cast Members, let alone aggressively slap them on the head to get their attention.

But, that is just what happened at one Disney Resort with the Guest being immediately removed from the Park after the incident and subsequently issued a long suspension.

And with so many Parks worldwide, Disney attracts Guests in droves to experience its rides, attractions, events, and spectaculars such as Disney After Dark: Star Wars Nites at Disneyland Resort or Disney Enchantment at Cinderella Castle in Orlando, and Disney Illuminations at Disneyland Paris.

Another huge draw for Park visitors is the huge range of Disney characters that Guests can meet. Recently, the lifting of pandemic restrictions has meant that Guests can now once again hug their favorite characters at Disneyland Paris but other Parks are still operating a distanced experience — at Disney World, this is called a “Sighting”, for example.

Unfortunately, due to the rise in COVID-19 infection rates, two Disney Parks remain closed. Hong Kong Disneyland has suffered huge profit losses for its extended closure and more recently, Shanghai Disney Resort was shuttered to combat the spread of the virus.

Shanghai Disney Resort is based in Pudong, China, and is co-owned by Shanghai Shendi Group and The Walt Disney Company in a joint venture that brought Disney Parks to China in 2016. The Resort features Shanghai Disneyland, which hosts the Enchanted Storybook Castle, two themed hotels (Shanghai Disneyland Hotel and Toy Story Hotel), and Disneytown.

Recently, a video has resurfaced over a rather horrendous Disney character incident featuring one Guest who aggressively slapped them over the head. Posting to TikTok, Disney Stuff Back Up (@disney_stuffbackup), shared the video of the Guest hitting ShellieMay at Shanghai Disneyland.

Glad the guest was kicked out

The video shows ShellieMay walking away with other Cast Members before a Guest reaches over and slaps the character hard on the hard, pushing the Bear forward. According to the footage, the slap was “very loud” with the performer needing to head backstage to recuperate. It goes on to say that the rude Guest was immediately removed from the Resort and issued a six-month ban.

In addition, the video shares that, according to performers, the heads of costumed characters are incredibly heavy, weighing anywhere between 6kg-10kg and composed of metal brackets inside. The TikTok also states that another character once received a concussion from a similar incident at the same Park with the visitor stating it was “just for fun”. It is not clear when the ShellieMay incident happened.

Across the world, other character incidents have also happened with one Captain Jack Sparrow performer claiming he was harassed and touched inappropriately multiple times by some Guests.

It is not all bad, though, last year saw one Guest interact hilariously with Cinderella’s sisters, Anastasia and Drizella, while another visitor at Disneyland Resort had harmless fun with Tinker Bell (and Maleficent) when he asked them “controversial” questions.

Have you ever witnessed an incident between Guests and Disney characters? Let us know in the comments down below!