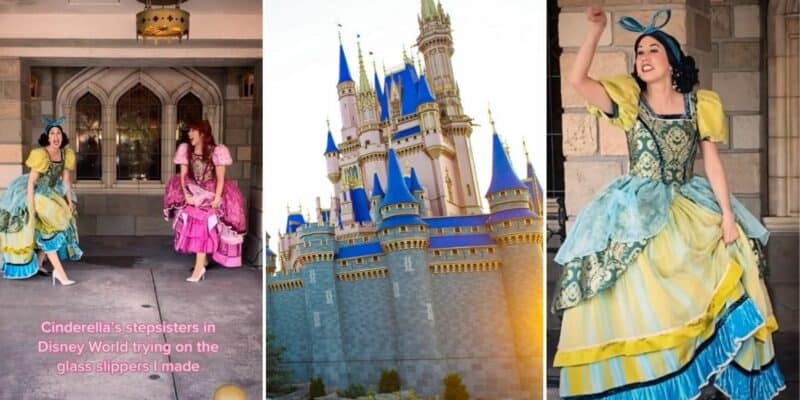 There is one thing that makes a Disney vacation at the Walt Disney World Resort unlike no other — the meet and greets. Even though meet and greets at the Florida theme park aren’t back as we know them just quite yet, it doesn’t stop hilarious antics from happening when Guests manage to interact with Disney characters.

Recently, the mean but comically loveable, Anastasia and Drizella AKA Cinderella’s Wicked Stepsisters, went viral on social media after one Disney World Guest gifted them their own “glass slippers”.

As Walt Disney World in Orlando gears up for its highly anticipated 50th Anniversary, coined as “The World’s Most Magical Celebration”, Guests can expect to encounter a whole host of new entertainment like the new nighttime spectacular, Disney Enchantment, as well as Mickey and friends in their brilliant 50th attire at the Disney Park. While there is a lot to look forward to during the celebrations that begin officially on October 1, there is still plenty of fun to be had right now in the Parks.

Guests can usually meet Disney characters across all of Walt Disney World’s theme parks in EPCOT, Disney’s Hollywood Studios, Disney’s Animal Kingdom, and Magic Kingdom. Meet and greets may be modified right now but for one Guest visiting Magic Kingdom this week, an encounter with the antagonists from 1950’s Cinderella took the internet by storm.

The video shows the moment each sister takes one of the shoes and hilariously reacts to owning the iconic “glass slipper”. Anastasia asks how the shoes fit both of them when they take different sizes to which the TikTok user replies, “they fit everyone but Cinderella”, sending the sisters into a new round of hysterics. From the laughs in the video, it seems that Anastasia and Drizella pulled a crowd due to their funny antics.

At the time of publishing the TikTok video is nearing 700k views since it was posted only yesterday with a further 159k likes. The creator tagged the official Disney Parks account in the comments letting them know how much joy the sisters gave the crowd and the video creator for trying on the shoes.

Fans of the Cinderella animated classic will know that Prince Charming used Cinderella’s glass slipper to identify the belle of the ball, the titular princess, much to the chagrin of her Wicked Stepsisters, and their mother, Lady Tremaine.

The sisters are often fan-favorites of the Parks, appearing occasionally in Fantasyland at the Disney Resort, and even on the balcony of Cinderella Castle. In fact, once, Drizella made a Guest cry during an unfortunate autograph situation, which just goes to show that these characters really are the same as the ones on screen.

Seeing Anastasia and Drizella on the balcony of Cinderella Castle was more common during the height of the pandemic when characters were meeting Guests from afar — recently one Disney World Guest entered this restricted area and was later issued a trespassing order.

As the 50th Anniversary draws nearer Cinderella Castle is finally complete following a number of cosmetic updates to mark the momentous occasion. Anastasia and Drizella won’t be happy about that, that’s for sure. Maybe next time, this Disney Guest could gift them their very own castles?

Have you ever met Anastasia and Drizella while on your Walt Disney World vacation? Let us know in the comments!