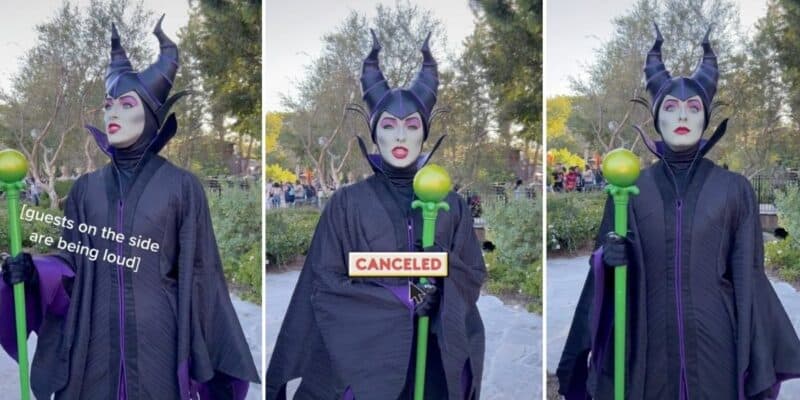 If there is one Disney character that can get away with shouting “Buffoons! Silence!” at a group of Guests to hear a question, it’s the Sleeping Beauty villain, Maleficent.

One Guest has made it his mission to ask all the characters at the Disneyland Resort a really, really “controversial” question, and it seems Maleficent has a lot of opinions.

Last week, one Guest visiting Disneyland Park at the Anaheim theme park found his video of Tinker Bell going viral across social media. Upon greeting the Peter Pan (1953) character in Fantasyland’s Pixie Hollow, Disney Guest and TikTok creator, Keith L. (@keithlapinig), asked the character the most “controversial” question. Now, it sounds dramatic, like the Guest was about to ask Tink about their political affiliations but instead, he asked “pineapples on pizza?”.

The video of Tinker Bell’s reaction and her own answer has now been viewed almost 6 million times and plays a huge part in the TikTok creator’s video series — the Guest is asking the very same question to other characters across the Disneyland Resort.

Now, in a relatively new addition to the “Asking Controversial Questions” TikTok series, Keith L. has revealed what Maleficent’s decision is regarding the highly debatable subject of pineapples on pizza while on his Disneyland vacation. You can view the video, which has been viewed 4.6 million times, here or below.

Maleficent has her opinions

Upon approaching the Disney character, the Guest tells Maleficent he is wanting to ask her a question, and in true classic villain style, she delivers. First, she commands the surrounding Guests to be silent, and then after hearing this “controversial” question, Maleficent declares pineapples on pizza as “evil in its own self”, garnering multiple laughs from the crowd.

Then, taking things further, Aurora’s nemesis almost lets her dragon loose, when she “cancels” the pizza topping and completely shuts down the question, shouting “DONE!” before moving on. The character interactions are what make the Disney magic happen, especially when they become so actively involved in Guest’s interests.

Even though Disneyland boasts plentiful rides like Star Wars: Rise of the Resistance in Star Wars: Galaxy’s Edge, classics like Haunted Mansion, or the new WEB SLINGERS: A Spider-Man Adventure attraction at Avengers Campus, sometimes taking a moment to interact with the characters — even from afar — can prove magical in itself.

If you’ve got the itch to see more villainous antics at the California Disney Resort then Oogie Boogie Bash at Disney California Adventure brings all-new characters like WandaVision‘s Agatha Harkness, Emma Stone’s Cruella, and even the slightly scary, Zombie Captain America from Marvel’s What If…? to the Disney Park.

The fun doesn’t just stop at Disneyland Park and Disney California Adventure Park AKA “The Happiest Place On Earth”, over on the other coast at the Walt Disney World Resort in Central Florida, Guests have been roasted by Gaston and entertained by Cinderella’s Wicked Stepsisters, Anastasia and Drizella. It’s all fun and magic at Disney Parks.

Have you ever had a fun interaction with a character while on your Disney vacation? Let us know in the comments below!