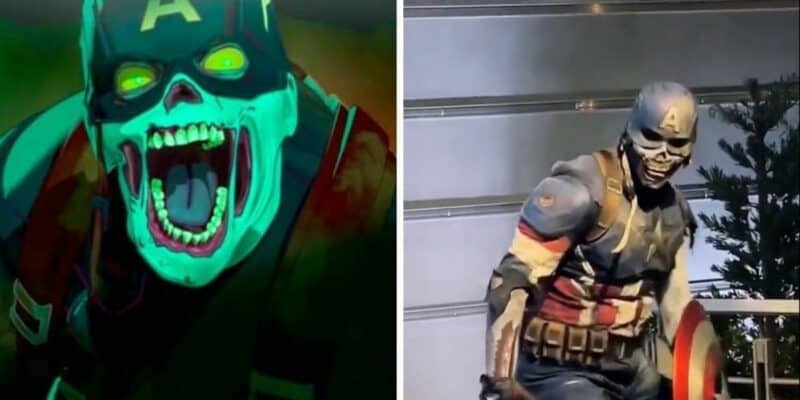 “ON YOUR LEFT!! GrrrrUGHhhhh”… it’s the What If…? Avenger, Zombie Captain America, at Disneyland Resort’s Oogie Boogie Bash! The new character sighting is uh… live(?)… at Disney California Adventure for those that dare venture close enough to the undead!

Zombie Captain America Makes His Debut at the Disney Parks

He’s here! And man, is he creepy! Keeping a (thankfully) social distance length away, the new meet and greet character sighting in Disney California Adventure’s Avengers Campus is perfectly spine-chilling. Captain America from Episode 5 of Disney+’s What If…? series turns The Walking Dead for Disneyland Resort’s after-hours party.

Miguel Vargas, Disneyland AP, foodie, and New Era Mad Hatter captured a slightly terrifying encounter with the Marvel Zombie from in front of his roped-off area… cleverly using the “On Your Left!” quote from the Avengers film series in the Marvel Cinematic Universe.

On your left, Zombie Captain America is on the loose #whatif #CaptainAmerica #marvel #disneyland pic.twitter.com/LoMUSjDiNG

Marvel fans knew Zombie Captain America was going to be joining the evening fun thanks to the Disney Parks TikTok account. They announced that Zombie Captain America, from the MCU’s What If…? series, would be joining Disney Parks Guests at the Oogie Boogie Bash in the Sunday October 17, 2021 clip. The short TikTok didn’t show the full Avenger, but the mood of the clip certainly stays true to the creep Halloween season.

Lord Blomquist on Twitter (handle of @blomquist33) posted a still shot that perfectly shows the Zombie Cap character’s degrading skin, terrifying teeth, and tattered costume. Shield in hand, you’d better watch your back as Zombie Captain America storms around and comes a little too close for comfort…

Disney fan and self-proclaimed zoo geek Danyeal shared her video from her Disney Park visit, showing the Zombie Cap storming forth from his foggy door and surveying his victims.

If you’re hoping to see the Zombie Captain America figure for yourself, you’ll already need to be holding a ticket to the Disneyland event. The party is now sold out for the entirety of 2021, as noted on the Oogie Boogie Bash webpage on the Disneyland Resort official website, as of Saturday, October 16:

There is hope that the Oogie Boogie Bash for 2022 will bring back Zombie Cap but also additional figures from the Marvel Cinematic Universe like Bucky Barnes or perhaps Zombie Doctor Strange and Wanda Maximoff. It certainly would be fun to see this Zombie Outbreak come to “life” in the Disney Parks!

Are you excited to see the Avengers Campus begin to grow and include the Multiverse? Leave us a comment below!