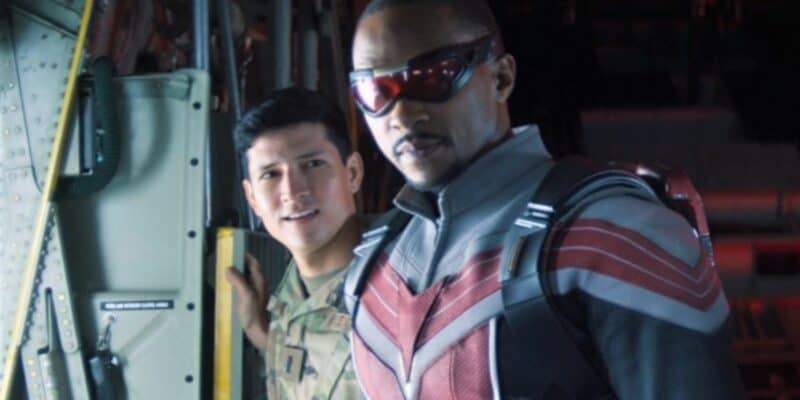 Falcon and the Winter Soldier dropped onto Disney+ last year following WandaVision. It followed Sam Wilson/Captain America – the superhero formally known as the Falcon (Anthony Mackie) and Bucky Barnes/Winter Soldier (Sebastian Stan) as they navigated the world after Avengers: Endgame (2019). Both Avengers were blipped away for five years following Thanos’s (Josh Brolin) snap and struggled with the legacy left behind by Steve Rogers/Captain America (Chris Evans).

Danny Ramirez recently sat down with ScreenRant to promote his upcoming film No Exit (February 25, 2022). He addressed whether or not his Air Force first lieutenant would be returning to the MCU. He last took Sam Wilson’s broken wings in the finale of FATWS “One World, One People.” Clearly worried about getting taken down by Kevin Feige’s Marvel security, Ramirez kept his answer vague:

“Well, I obviously can’t say anything but I’m just genuinely excited in the direction that all of Hollywood is going in the amount of representation on screen for Latino/Latinx characters and, with Joaquin, I’m really excited with who he is as a person and how he carries himself and that’s all I’m gonna say, because I can’t! You know I can’t!”

Who is Joaquin Torres?

In the comic books, Torres was mutated by an evil scientist named Karl Malus (who showed up Jessica Jones on Netflix). He became a human/falcon hybrid after his DNA was mixed with Sam’s avian partner Redwing. Both Joaquin Torres and Sam Wilson have a psychic link with Redwing.

It is doubtful that Marvel Studios will adapt this comic book arc in the MCU. Torres will most like repair the wings that Sam gave him. Sam Wilson does not need them anymore since he was gifted vibranium wings from Wakanda before taking the mantle of Captain America and leaving Falcon available to Torres.

The fourth Captain America film was confirmed back in April 2021. Falcon and the Winter Soldier showrunner Malcolm Spellman will be working on the script with Dalan Musson. There is no release date at this time, but it will most likely not hit theaters until 2024 at the earliest. There is no director attached to the Marvel movie yet, but FATWS director Kari Skogland is rumored to be in the running, though she has been reported to replace Patty Jenkin’s on a Star Wars film.

The next Marvel movie coming to theaters is Doctor Strange in the Multiverse of Madness (May 6, 2022) with Doctor Strange (Benedict Cumberbatch) and Wanda Maximoff/Scarlet Witch (Elizabeth Olsen). And the next series coming to Disney+ will be Moon Knight (March 30, 2022), starring Oscar Isaac as Marc Spector/Steven Grant/Moon Knight.

Let us know in the comments if you are excited for Danny Ramirez’s Joaquin Torres to take the mantle of Falcon from Anthony Mackie’s Sam Wilson, who is now Captain America.