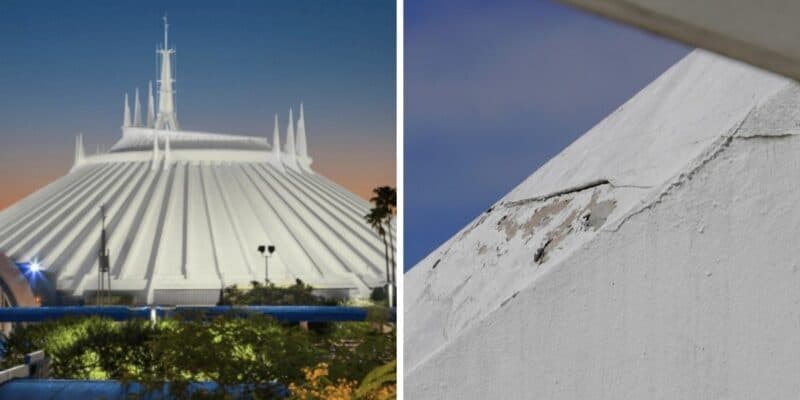 The fan-favorite ride opened at Magic Kingdom in January of 1975, making it the oldest active roller coaster in Florida! Well, considering how long this ride as been open to Guests, it’s no surprise that the ride has taken some wear and tear over the year.

Space Mountain has undergone various refurbishments to ensure the ride continues operating smoothly, but Imagineers must also keep up with the outside of the attraction due to the hot Florida sun beating down on the building day in and day out.

On a recent visit, Twitter user bioreconstruct noticed some weathering on the outside of Space Mountain. They shared a handful of photos along with the caption:

A look at some of the weathering of Space Mountain.

A look at some of the weathering of Space Mountain. pic.twitter.com/vXmIuv9z3X

Related: Cinderella Castle Decorations Fall Off Ahead of 50th Anniversary

As with anything, it is no surprise that parts of Space Mountain are becoming weathered, especially being out in the hot Florida sun day in and day out. We have seen other areas of Walt Disney World experience weathering as well, including the Tangled area in Magic Kingdom and on Spaceship Earth in EPCOT.

At this time, we are unsure if Disney has any plans to fix the weathering happening at Space Mountain, but Inside the Magic will update you as we get information.

Have you noticed the weathering around Space Mountain recently? Let us know in the comments below.