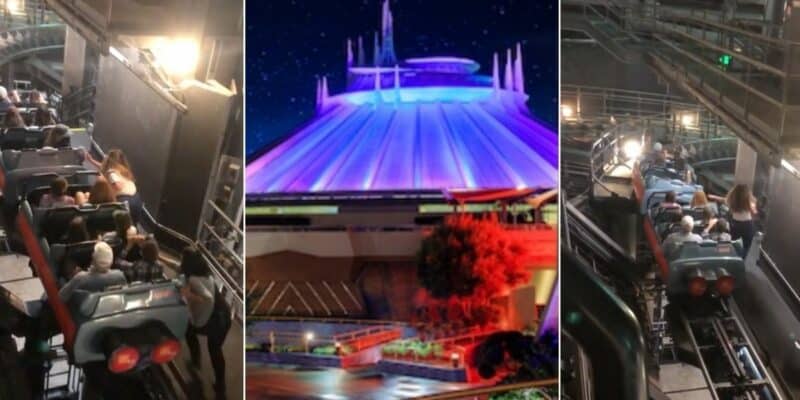 A Disney Resort stay is perhaps one of the most magical vacations Disney fans can take. From the plethora of attractions to Main Street U.S.A, world-class hotels, and dining experiences, Disney Parks across the globe are there to cater to every Guests’ needs.

That being said, there are some times when real-life intrudes on the Disney magic, like on this resurfaced video of a Space Mountain malfunction at the Disneyland Resort in California.

Bringing that prolific Disney magic to Anaheim, the Disneyland Resort offers to take Guests to magical new worlds. Whether it’s the all-new Avengers Campus at Disney California Adventure Park to snapping photos at Sleeping Beauty Castle or meeting characters such as Tinker Bell at Pixie Hollow, the original Disney theme park location still enchants visitors even after 66 years. There is also, of course, the Downtown Disney district too.

The popularity of the Disney Park led to the Walt Disney World Resort in Central Florida opening in 1971. The iconic Disney vacation destination is currently amid its 50th anniversary celebrations AKA The World’s Most Magical Celebration, delivering new merchandise, treats, and nighttime spectaculars like Disney Enchantment surrounding Cinderella Castle, the Disney Resort is celebrating in style.

With Disney news coming almost weekly, one older video has resurfaced of a behind-the-scenes look at just what happens when Space Mountain malfunctions. The ride, which can be found in Disney Parks across the globe, is one of the most recognizable and sought after for Guests to experience. Nestled in Tomorrowland, the Disneyland Park iteration of the attraction is still a key destination for vacation goers.

While the dark ride is usually a thrilling experience, for some Guests, the ride was even more dramatic after a malfunction led Cast Members to manually push the vehicles to get them moving once again.

We can see in this video from Reddit, that Cast Members were needed to push the vehicles in spite of the technology used to run the ride. Reddit user Kfurt13 shared the old video:

More space mt behind the scenes! I had no idea they had to manually push the cars back when the ride goes down lol

More space mt behind the scenes! I had no idea they had to manually push the cars back when the ride goes down lol from Disneyland

You can see from the video that two Cast Members at the Disneyland Park attraction had to hold onto the vehicle and, running, push the Guests to get moving again. The comments shed light on this not uncommon occurrence. One user, 415and808, said:

Yes! Was on Space Mountain once when it went down. We were in the car at the highest point, so we had to wait until all others finished down the tracks. This random CM pops up out of nowhere and says “I’m going to have to push you…and it’ll feel REALLY slow to start, but you’ll end up going faster than you would normally toward the bottom, but don’t worry because the brakes will still work when you get to the end!”

Another comment from dunnkw revealed that this type of malfunction happens on the other coast as well:

I worked at Space Mountain at WDW in 2001 and we had to do that all the time. We did it to one group near closing time and this guy lost his freaking s*** on us. Then the manager just kicked him out. Didn’t even bother to try and butter him up. We were tired, they were tired. He just made him leave and that was that.

Breakdowns and evacuations are the norms at Disney Parks but Cast Members will seemingly aim to compensate Guests if their vacation is disrupted by events like these. Recently, Guests riding Pirates of the Caribbean at Disneyland Resort were rescued by firefighters after 90 minutes of being stranded. Then, at Disney’s Hollywood Studios in Walt Disney World, Guests were evacuated from the “highest hill” of Rock ‘n’ Rollercoaster Starring Aerosmith.

Oftentimes, Guests experiencing these sorts of events would be compensated with a FastPass+ for another attraction, although now with the launch of Disney Genie, Disney Genie+, and the Individual Lightning Lane Selections at Walt Disney World (soon at Disneyland Resort), the time may come when Cast Members use this system to apologize to Guests instead.

Have you even been manually pushed on a Disney attraction? Let us know in the comments down below!