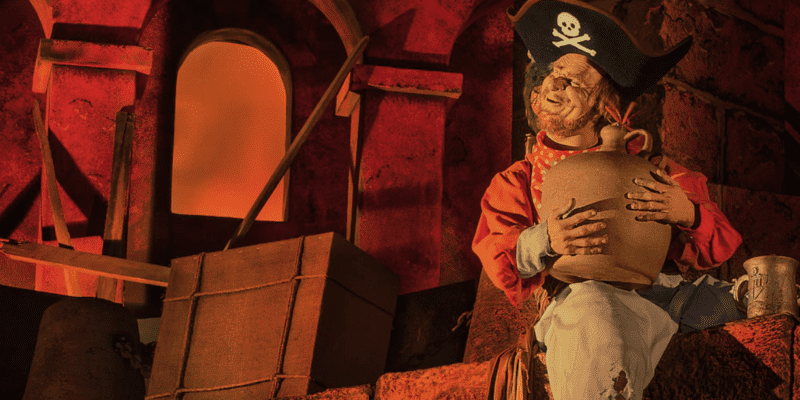 Scary things can be expected on Halloween even if you’re at Disney Parks. Over in Walt Disney World, Guests can experience the spooky Boo Bash After Hours event, while Disneyland Resort visitors can meet characters like WandaVision‘s Agatha Harkness and even Zombie Captain America at Avengers Campus on selected nights at the Oogie Boogie Bash.

One set of Disney fans found themselves in for a real fright on October 31 when they became “trapped” on the fan-favorite attraction, Pirates of the Caribbean for over 90 minutes before being evacuated. Let’s see what happened…

As the Disneyland Resort heads into full Christmas swing across both Disneyland Park and Disney California Adventure Park, for a certain set of Guests, the spooky season ended in rather a dramatic climax on Halloween.

Guests riding the Pirates of the Caribbean attraction in New Orleans Square had to be evacuated when it malfunctioned, leaving Cast Members attempting to restart the swashbuckling water meets dark-ride for a lengthy period of time. A staple attraction of the Disney Parks experience, a version of Pirates of the Caribbean can be found at the Disneyland Resort in California, Orlando’s Magic Kingdom in Walt Disney World, Tokyo Disneyland, Shanghai Disneyland, and Disneyland Paris.

Pirates of the Caribbean is a hugely popular, Guest-favorite ride and its long tenure across all the Parks is a true testament to that. However, that being said, despite its longevity, the attraction can still malfunction. And it seems, the Ghosts of Pirates Past were out in force on Halloween.

We can see from DL Stats on Twitter, the moment Pirates of the Caribbean became interrupted at the Anaheim theme park and that it took 159 minutes until it became an active attraction again.

Pirates of the Caribbean has been temporarily interrupted. On average, an interruption takes 27 minutes. #Disneyland #DLR #California #DisneyParks #MagicIsHere

Pirates of the Caribbean has been reopened after an interruption of 159 minutes. #Disneyland #DLR #California #DisneyParks #MagicIsHere

Pirates of the Caribbean has been reopened after an interruption of 159 minutes. https://t.co/UJrZrlzlAF #Disneyland #DLR #California #DisneyParks #MagicIsHere

We can learn from this account on The Orange County Register — the publication also shares photographs — that the broken-down attraction eventually led to a full evacuation.

Riders stuck in the Town Square section of the attraction watched the same repetitive animatronic scenes and listened to the “Yo Ho (A Pirate’s Life for Me)” theme song on a loop for 30 minutes before Disneyland stopped trying to restart the attraction, turned on the lights and turned off the audio soundtrack and animation.

The animatronic women chasing robot pirates in a continuous circle in the Town Square scene continued their pursuit unabated throughout the 90-minute ordeal, according to riders stuck in the attraction.

Via SFGate, we can ascertain a few more details regarding the evacuation incident at the Disney theme park. It is stated that the ride became stuck for this specific Guest, Brian Rokos, around the moment Jack Sparrow emerges from the barrel, and after 20 minutes, he suspected something was wrong.

We are stuck on Pirates of the Caribbean at Disneyland. Boats have not moved for about 10 minutes.

We are stuck on Pirates of the Caribbean at Disneyland. Boats have not moved for about 10 minutes. pic.twitter.com/ZG0vjKWqMC

Commenting on how Guests near land were making a quick evacuation, Rokos noticed the water surrounding him:

“There’s no way I was going to be able to get out,” he said. “Someone suggested that I should walk the plank, but I had no plank to walk! I had no idea how to get off… We were literally trapped.”

The OC Register goes on to detail how riders located close to some form of land were evacuated relatively quickly but those out on the water were left for longer until they could be extracted safely. It is said that the Disneyland Fire Personnel aided Guests off the attraction while other Cast Members clad in waders pushed boats to safety through the water.

The Register concludes by stating that the evacuated Guests were led through the “backstage” area of the attraction and were met with “five fire vehicles and several firefighters” outside of Pirates of the Caribbean, some of which he recognized helping Guests earlier in the evening. The report concludes by saying:

Evacuated riders were rewarded with two front-of-the-line FastPasses for any ride in the park — except the Rise of the Resistance or the holiday version of the Haunted Mansion.

It is not uncommon for favorite attractions to break down even at The Happiest Place on Earth. However, as reported, Disney tends to compensate Guests for the inconvenience by giving them passes to ride other attractions. Luckily for this Guest, he managed to exit Pirates of the Caribbean just in time for the Halloween fireworks — Halloween Screams — at Disneyland Park.

Have you ever been evacuated from a Disney attraction? Let us know in the comments below!