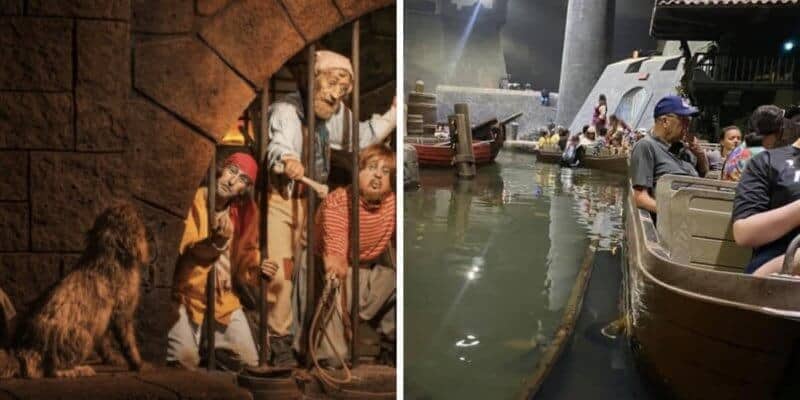 Last weekend we reported that Guests got to see a Pirates of the Caribbean with the lights on as they were evacuated off of the dark ride. Well, this happened once again as the attraction experienced technical difficulties and Guests had to get off of the ride mid-way through.

Sarah L. took to the Facebook group, Annual Passholders – Walt Disney World Resort, to share a photo and a video showing what she calls a “dream come true”.

She was riding the Magic Kingdom attraction yesterday, July 9, when suddenly, it faced technical difficulties and the lights came on. After waiting almost an hour, Cast Members came to the boats to pull them to safety.

Below, you can see screenshots of the video taken, which shows the Cast Members moving the boat to a platform so that Guests can get off safely.

It looks as though Pirates of the Caribbean is continuing to face technical difficulties as according to My Disney Experience, the ride is listed as temporarily closed at approximately 1:05 p.m. today, July 10. We have an Inside the Magic team member inside Magic Kingdom today who was told the ride has been closed all day.

Have you ever been evacuated off of a Disney Parks ride? Let us know your story in the comments below.