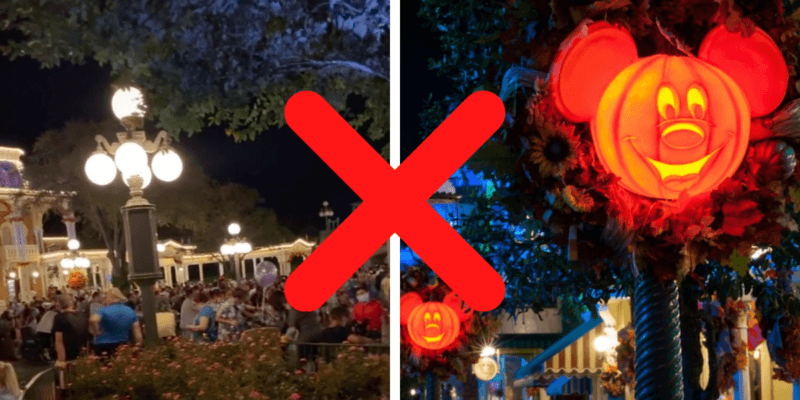 Boo Bash launched last night with many fans enjoying this new seasonal celebration of all things spooky. However, for some non-event Guests who were leaving the Disney Park for the day, Boo Bash caused a certain amount of chaos at the Park exits during the crossover between the Park closing and the After Hours event beginning.

Boo Bash takes place on select nights from August 10 through October 31, replacing Mickey’s Not-So-Scary Halloween Party this year. While Boo Bash does offer a similar itinerary to its predecessor, it must be noted that Boo Bash is an After Hours event taking place from 9 p.m. or 9:30 p.m. for three hours (a typical amount of time for a Disney After Hours event), as opposed to a longer Halloween Party such as Not-So-Scary, which would start earlier in the evening.

With shorter attraction wait times, trick or treat locations, character sightings, and themed cavalcades, Boo Bash will sure scratch any Guest’s Halloween itch. But following its debut night (August 10) there seem to be some crowding issues for those who had regular theme park tickets who were attempting to leave Magic Kingdom after the event began.

Guests attending Boo Bash recently showed how quiet Magic Kingdom was due to the lower capacity of visitors admitted to the event. However, one Magic Kingdom Park Guest — who was not an attendee of the After Hours spooky celebration — shared how the non-event Guests were directed to exit the Park, and it caused some disruption.

Sharing to TikTok, Maux (@mauxsmagickingdom), showed huge crowds attempting to leave the Park after Happily Ever After finished and Boo Bash officially beginning.

In the video, the TikToker shares the scenes at Magic Kingdom as Boo Bash began. Crowds had gathered and long lines formed due to, what the TikToker claims, Disney “trying out a traffic situation for entering and exiting the Park.” The crowd shown in the video is extremely large and contrasts what usually happens at Disney’s Halloween Party in the past — Guests attending Mickey’s Not-So-Scary Halloween Party would be able to enter from 4 p.m. with a wristband and the non-Party visitors would exit through the main entrance before the Party began at 7 p.m.

The comments on the TikTok video reveal more from the frustrated Guests. Multiple Guests shared that it took them over an hour to get back to their car following the Happily Ever After fireworks at Cinderella Castle, while other attendees are questioning why this approach at visitor management seems harder than bigger events in the past at the Disney Resort. Maux confirms in the comments of her video what was happening:

“we talked to a cast member who explained that it was because they were trying something and that it will need to be tweaked.”

They go onto to say that even though the Happily Ever After firework show ended at 8:45 p.m., they didn’t exit the Park until around 10 p.m.

It must be said, though, that Boo Bash is a Disney After Hours event and not a like-for-like replacement for Mickey’s Not-So-Scary Halloween Party, so the different approaches to Guest management should be expected when comparing the two celebrations. During After Hours events that were held in the past, Disney often had an exit system in place in order to direct non-event Guests out of the theme park. However, in order to reduce crowding, it appears that there are some issues that should be worked out for non-event Guests on Boo Bash event nights for the rest of this season.

Also please note that if you are attending Boo Bash, you can enter the Park at 7 p.m. to soak up even more of the Halloween atmosphere while on your Disney vacation, but the event officially commences at 9 p.m. or 9:30 p.m. depending on your event date.

And if you’re not familiar with what to expect from Boo Bash at the Walt Disney World Resort, then be sure to visit the Disney World website for all the official details.

Are you attending Boo Bash this year? Let us know in the comments below!