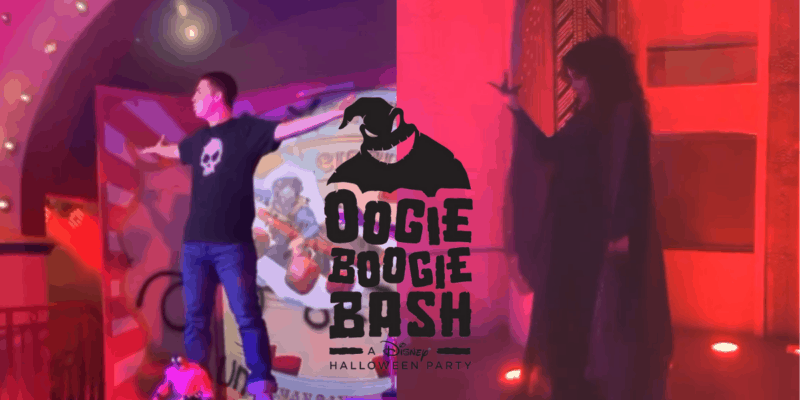 Halloween is upon us and spooky season is in full swing at Disneyland Resort! The Halloween Time season began on September 3, and the first Oogie Boogie Bash of the season is this Thursday, September 9, but Cast Member Previews of this Disney Halloween Party have already started!

Last night, Disney Cast Members had the opportunity to experience Oogie Boogie Bash in a special preview experience. Of course, they were able to get a ton of Halloween candy, take in the spooky atmosphere, and even see the Disney Villains and iconic characters that are part of the Immersive Treat Trails.

Oogie Boogie Bash – A Disney Halloween Party is known for its Immersive Treat Trails. While there are Treat Trails throughout the Park, some of them feature Disney Villains! Guests have the opportunity to see and chat with these characters, including Dr. Facilier from The Princess and the Frog, The Queen from Snow White and the Seven Dwarfs, Oogie Boogie from The Nightmare Before Christmas, Maleficent from Sleeping Beauty, and more.

Disney announced just a few weeks ago that three new villainous characters would be coming to Disney California Adventure Park for the very first time: Agatha Harkness from the hit Disney+ Marvel series WandaVision, Cruella from the all-new live-action film Cruella, and Sid from the original Pixar Animation Studios film Toy Story. These characters get their own Immersive Treat Trails in the Park — and by the looks of it, they look amazing.

Related: Who Is Agatha Harkness in ‘WandaVision’?

Hayley posted a video of Agatha Harkness on Tiktok:

Disney Hype Beast shared a photo of Sid as well as Agatha Harkness:

Here is a look at Agatha from WandaVision. You can find her over at the Ancient Sanctum in Avengers Campus! Thank you @adam_kap06 for the photo!!!!

It was Agatha all along 🎵 Harkness is bringing the darkness to #OogieBoogieBash this year! #agathaharkness #halloweentime #disneyland

Kaboom! The Sid Show Circus has arrived at Pixar Pier 💥 Get ready to play along at #OogieBoogieBash! #halloweentime #Disneyland #toystory

Cruella is the FUTURE of Oogie Boogie Bash and it is fabulous, darling 🐾 #oogieboogiebash #cruella #halloweentime #disneyland

Take a look at this video of the Sid Show Circus on Pixar Pier, reposted by Five Fires/The Cali Bae:

The Sid Show Circus! Real life Sid from toy story 😱🤯! This was for a CM preview of oogie boogie bash. Video from @realmousemedia
🔥🔥🔥🔥🔥

It’s clear that the hype for Oogie Boogie Bash is real. The event has been completely sold out for weeks now, so if you were able to purchase tickets, you’re in luck (we think this event is totally worth it)! These photos and videos were shared from the Cast Member preview night on Tuesday, but we look forward to all of the lucky Guests seeing all of the Disney Villains in person starting this Thursday. Happy Halloween, everyone!

For more information on Oogie Boogie Bash, visit the official website and read the description below:

Oogie Boogie Bash – A Disney Halloween Party
Hang with Oogie Boogie and popular Disney pals dressed in their howliday best—select nights in September & October 2021!
Tickets for this event are sold out, but you can still enjoy a variety of attractions, entertainment, dining and other special events during Halloween Time at the Disneyland Resort.