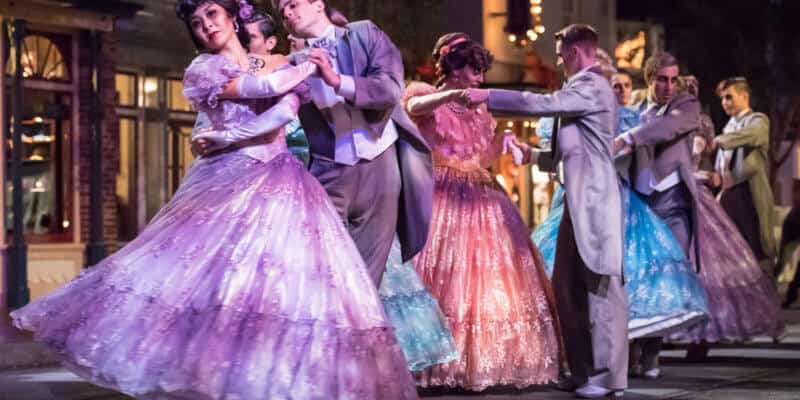 Spooky season is in full swing at Disneyland Resort! Halloween Time officially began last Friday, September 3, bringing happy haunts to Disneyland Park and Disney California Adventure Park. Ahead of the first night of Oogie Boogie Bash this week, some lucky Disney hotel Guests were able to spot the Halloween parade rehearsal. Talk about getting in the Halloween spirit!

Oogie Boogie Bash – A Disney Halloween Party takes place at Disney California Adventure Park at Disneyland Resort. Debuting in 2019, this Halloween party quickly became a fan favorite after it replaced Mickey’s Halloween Party at Disneyland Park. This year, the party will be hosted on select nights from September through October at Disney California Adventure, beginning on September 9, and it has already completely sold out for the season.

Ahead of any special event, Disney performers will need to rehearse, and Oogie Boogie Bash is no different. Oogie Boogie Bash will feature the Frightfully Fun Parade. And, as the event begins this week, the parade has been in rehearsal mode to gear up for this year’s performances.

Many rooms at Disney’s Grand California Hotel & Spa (one of the three onsite hotels at Disneyland Resort, the other two being the Disneyland Hotel and Disney’s Paradise Pier Hotel) offer views of Disney California Adventure Park. Guests staying in these rooms can see into the theme park and watch attractions running and even performances taking place. Recently, some lucky Guests got to get into the Halloween spirit and see the Frightfully Fun Parade rehearsing on the streets of DCA!

Theme park blogger and YouTuber The Cali Bae/Five Fires (@thecalibae) reposted a video on Instagram from Disneyland Resort Instagrammer and Annual Passholder Lindsey Conway (@disneywithlindsey) to show the parade rehearsal. In the video — taken from Disney’s Grand Californian Hotel & Spa — we can see and hear the Frightfully Fun Parade rehearsing in the theme park.

You can read the full description of the Frightfully Fun Parade, a fan-favorite Disney Halloween parade, below:

This Halloween, the Guest-favorite Frightfully Fun Parade takes to the streets of Disney California Adventure Park during Oogie Boogie Bash.

Could that be skittish schoolmaster Ichabod Crane tiptoeing down the street? The eerie Headless Horseman of Sleepy Hollow carries a flickering jack-o-lantern in his gloved hand, signaling the end of the pre-parade and the beginning of something spectacular.

Mickey Mouse and Minnie Mouse, dressed in colorful Halloween costumes, lead the way in this spectacle of spooky spirits, all in fun and not-so-scary.

From Tim Burton’s The Nightmare Before Christmas, Jack Skellington, the Pumpkin King, brings greetings from Halloween Town, as residents arrive to celebrate their favorite time of year.

It wouldn’t be a Halloween parade without a gathering of ghosts, when the iconic Haunted Mansion attraction comes to “after-life,” with swirling ballroom dancers, ominous gravediggers and a trio of hitchhiking ghosts.

Inspired by Disney’s The Princess and the Frog, Dr. Facilier calls on mystical powers, summoning his Shadow Men from the bayou to loom large over his strange and twisted parlor.

This parade takes on a life of its own as mischievous Disney Villains appear out of the darkness, ready to stir up more trouble. Before it’s all done, a dungeon-like lair takes over the parade route, along with a fierce dragon and a wicked gathering of villainy, including Cruella and more.

The ever-curious and whimsical Cheshire Cat brings up the rear, smiling at all the magical mayhem.

The Frightfully Fun Parade — featuring a variety of Disney characters in their Halloween costumes, Disney Villains, Haunted Mansion ghosts, and more — is just one of the many offerings this year at Oogie Boogie Bash – A Disney Halloween Party. There is so much to experience at this special event this Halloween season at the Disneyland Resort. You can visit the official website to learn more.

Have you ever seen a magical sight like this while staying on property at Disneyland Resort or Walt Disney World Resort? Let us know in the comments!

Comments Off on Guests Spot Halloween Parade Rehearsal From Their Disney Hotel Room!