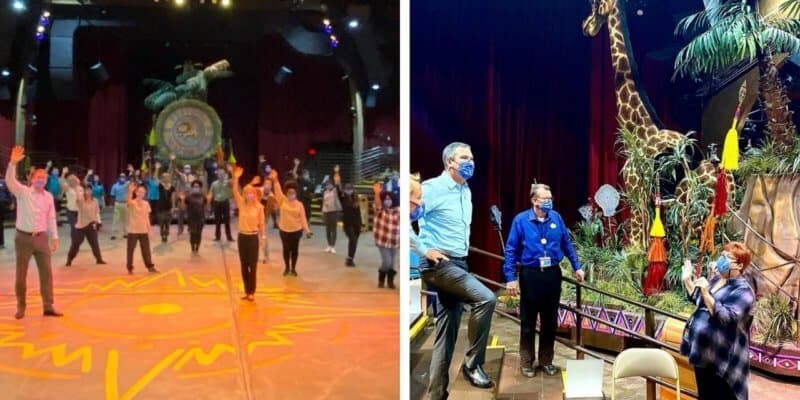 During the pandemic, there have been many changes at Disney World. From mask-wearing to socially distanced queues, to having to make reservations to enter Magic Kingdom, EPCOT, Disney’s Animal Kingdom, and Disney’s Hollywood Studios —  The theme park experience has truly evolved.

One thing that many Guests have been missing is all of the entertainment that was removed from the parks. Parades and shows are no longer available at Walt Disney World Resort, which was a true loss for Disney Guests considering the level of excellence that Disney World adheres to when it comes to their entertainment is extremely high and is a major player as to what helps create the magical experience.

After the tens of thousands of Cast Members were laid off, many Guests lamented the fact that a big chunk of those Cast Members were the performers that they loved to watch when visiting Mickey Mouse. That being said, Disney did assure their Guests that entertainment would return to Disney World.

One of the longest-running very popular theme park shows is the Festival of the Lion King, which takes place at Disney’s Animal Kingdom. The show showcases many of the iconic Lion King music sung by spectacular vocalists while Guests watch trapeze artists, stilt walkers, dancers, fire breathers, and more in a colorful and interactive celebration.

Recently, we discovered that Disney was getting ready to bring that show back this summer with a few tweaks to adapt to the current pandemic. The news of entertainment returning was, of course, very exciting, but now we can really feel as if the show is coming back to life, as the cast is currently in rehearsal.

Walt Disney World President Jeff Vahle (@jeffvahle) took to Instagram to showcase the cast of A Celebration of Festival of the Lion King, getting ready to reopen!

Our cast is back in rehearsals for “A Celebration of Festival of the Lion King,” preparing for the show’s mid-May debut as entertainment continues to return across Walt Disney World. Disney’s Animal Kingdom Vice President Sarah Riles and I stopped in to welcome them recently, and hearing that wonderful, familiar music put a lump in my throat. Thrilled to have these talented Cast Members back on our stage!

From this, we received the exciting news that A Celebration of Festival of the Lion King would be returning in May, which is sooner than expected for most! We also can tell that although the show will change, it seems the music we know and love will continue to live on in this new rendition of the show.

Although this show will be returning, many other shows such as  Citizens of Main Street, the Citizens of Hollywood, Beauty and the Beast Live on Stage, the Monsters, Inc. Laugh Floor, The Festival of The Lion King, Finding Nemo The Musical, the Hoop-Dee-Doo Revue, the Move It! Shake It! MousekeDance It! Street Party, Mickey’s Royal Friendship Faire, and more have yet to return.

Are you excited to see the Festival of the Lion King back at Disney World?

Comments Off on ‘Festival of the Lion King’ Cast In Rehearsal, Show Opens Next Month!