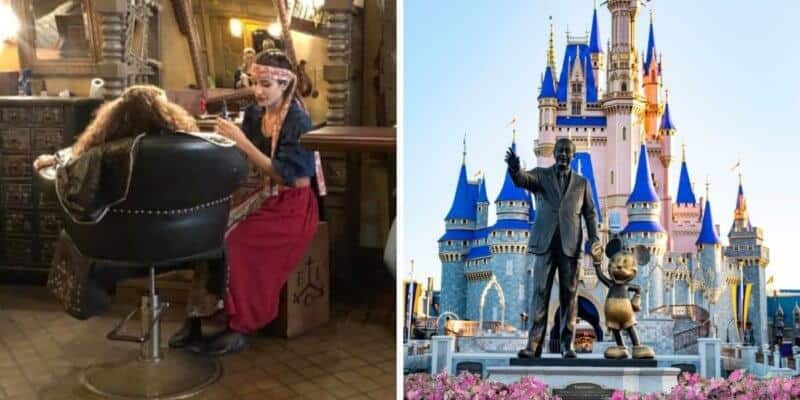 It wasn’t long ago that The Walt Disney Company announced they made the difficult decision to layoff over 28,000 Disney Parks employees.

Chairman of Disney Parks, Experiences and Products Josh D’Amaro released a statement which announced the unfortunate news that thousands of Cast Members across Disneyland Resort and Walt Disney World Resort will be laid off, saying that “as heartbreaking as it is to take this action, this is the only feasible option we have in light of the prolonged impact of COVID-19 on our business.”

And now, a former Disney World Cast Member is speaking out on the unfortunate news.

Cheyenne Sky Romanillos, a former Disney World Cast Member, has seen a lot of her former co-workers and friends being affected by the recent wave of layoffs and her heart hurts for them.

Romanillos worked at Disney as a Pirate Master a couple of years ago and went by the pirate name of Anne Stormwater. Now, she is in the Air Force stationed in Germany, and when she heard about the recent Disney layoffs, she was completely disappointed. “So many of my friends and old coworkers were affected,” she told Inside the Magic. “With all of the Cast Members leaving, a little of the Disney magic left with them.”

The 22-year-old former Cast Member has been a lifelong Disney fan, growing up only 45 minutes from Walt Disney World. “It all started with Disney being a special place for my mom when she was growing up so her love for Disney was inherited by my brothers and I,” she told Inside the Magic.

But Romanillos isn’t just any old fan, she has Disney in her blood — literally. “My uncle Jr. (Pres Romanillos) was a Disney animator who worked on many of Disney’s most famous movies,” she shared with us. “He created Shan Yu and worked on Pocahontas so Disney really is in my family! His desk sits in the Disney Animation Research Library.”

But her all-time favorite Disney memory was on her 11th birthday thanks to her mom and some incredible Disney Cast Members, which is a big part of why she feels personally affected by these layoffs.

“A few days leading up to my birthday my mom would leave letters from ‘Mickey’ in my room and the day before my birthday she left a bunch of Mickey head balloons,” she explained. “We stayed in a hotel the night before my birthday close to Disney. I brought my beloved stuffed animal Eeyore (who I still have with me in Germany). My mom surprised me with a birthday outfit to wear to Disney that day. It was a white shirt with Eeyore on the front and my name under Eeyore, a jean skirt and leggings to wear underneath.”

She continued, “We got to Disney very early (I always love getting to Disney early!). My mom led me to the castle and surprised me with breakfast at Cinderella’s Royal Table! When we got to the table there was a whole Winnie the Pooh bouquet with balloons waiting at my table. It was so magical and I felt like a princess.”

But the Disney magic didn’t stop there. “After breakfast we headed over to the Bibbidi Bobbidi Boutique (another surprise!). I got the Jasmine outfit and so did Eeyore,” she said. “Eeyore got the matching Jasmine outfit for dolls and it fit perfectly. During the final touch, the crown, not only was I given a crown but Eeyore got one too. I [will] never forgot that simple gesture.”

Romanillos explained how that touch of Disney magic stayed with her, even to this day. And because of that special birthday, she wanted to be able to pay it forward and create magic for other kids visiting Disney World, just like she received on her 11th birthday.

“I paid it forward during a mermaid makeover at The Pirates League when a child brought her stuffed animal,” she told Inside the Magic. “I transformed the girl and the stuffed animal both into mermaids! I’m be stuffed animal got a matching mermaid bracelet to wear. It made her day but also reminded me of when I brought Eeyore to my makeover. The rest of my birthday was full of surprises and a yummy cake at the end of the night. My mom made my whole birthday the most magical and unforgettable day ever!”

Disney magic and Cast Members hold a special place in Romanillos’ heart, being a former CM and helping spread the Disney magic. So when she heard about the layoffs, she was devastated. But, despite the unfortunate news, Romanillos wants to say thank you to all the Disney Cast Members and let them know to keep their heads up, even during such an unprecedented time. “I would like to say thank you to all of the Disney cast members (even the ones who were laid off) for making Disney magical and for creating lifelong memories,” she said.

“Always remember, be kind and have courage!”

Approximately 28,000 Disney Cast Members will be laid off. In total, Disney has 220,000 employees. Our thoughts are with all of those Cast Members who are being affected by this wave of layoffs. If you are looking for ways to help these Cast Members, check out our resource article here.