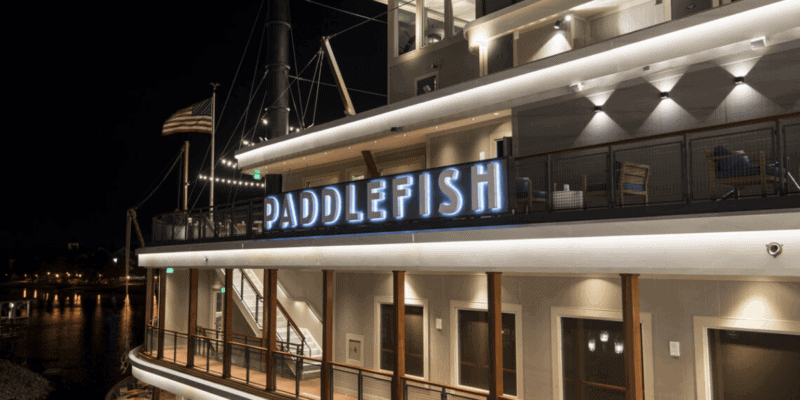 Over 100 workers at iconic Disney Springs restaurants, Paddlefish, and Terraliina, are reported to be laid off.

According to the Orlando Business Journal:

Two restaurants at the Disney Springs dining, shopping and entertainment complex plan to lay off dozens of workers and cut the hours for others due to the negative economic impact caused by the pandemic.

Parent company Levy Restaurants informed the state on June 24 that its Paddlefish and Terralina Crafted Italian eateries at Disney Springs have upcoming job terminations and hour reductions affecting a total of 271 workers.

A total of 143 jobs will be eliminated effective Aug. 1 at Paddlefish (87 job cuts) and Terralina (56 job cuts). The remaining 128 workers between the two restaurants will see their hours cut. The company told the state that while the job terminations are permanent, its employees have been invited to apply for future positions “when business levels return.”

While the Levy Restaurants executives could not be reached for comment, it stated in a letter to the State that a significant factor in the layoffs was the impact on local sports and events.

“Given the continued unforeseen business circumstances created by recent sport league announcement that teams would not return to playing in front of fans for a number of months, and/or government directives requiring longer term cancellation of large events due to the Covid-19 pandemic, additional notice of job loss was not practicable.”

According to the Orlando Business Journal, “Levy is one of the nation’s largest hospitality companies specializing in food and beverage management at entertainment and sports venues, including Amway Center, the home court of the NBA’s Orlando Magic in downtown Orlando.”

This news comes almost exactly one month after Disney Springs began reopening after the extended closure caused by the global pandemic. On the same day, Walt Disney World announced they would reopen extended Dining reservations on June 30, 2020.

Situated in a refitted riverboat, Paddlefish is one of the most recognizable restaurants at Disney Springs. It replaced Fulton’s Crab Shack in 2017. Terralina Crafted Italian opened a year later and gave the taste of Italy’s Lake District. It also sits along the edge of Disney Springs’ Lake Buena Vista.

Have you ever dined at either Paddlefish or Terralina Crafted Italian? What do you think of either? Do these layoffs surprise you? Let us know in the comments!