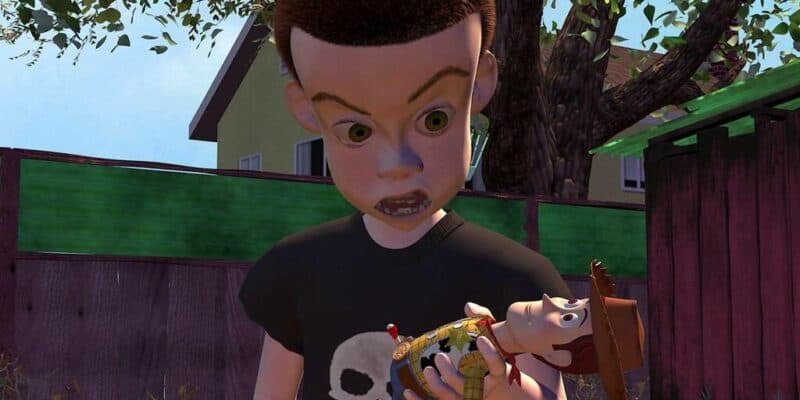 This is Halloween! This is Halloween! Specifically, this is Oogie Boogie Bash! The Disney Halloween Party will officially be kicking off its spooky season in just a couple weeks at the Disneyland Resort. Disney has confirmed some big news all about some of the all-new Disney Villains appearing at the event.

Just this week, Disney offered a sneak peek of three villains (or, rather, antagonists) who will be making their Oogie Boogie Bash debut — including Cruella from the recent live-action film and Agatha Harkness from the Disney+ hit series WandaVision. And now, we know for certain that Sid from Toy Story will be making an appearance, as well!

If you’re unfamiliar, the Disney Fandom Wiki describes Sid as the following:

Sidney “Sid” Phillips is the main antagonist of the 1995 Disney•Pixar animated film, Toy Story. He was Andy’s evil next door neighbor. Unlike his neighbor, he did extremely horrid things to his toys instead of treating them with love and care, until he learned to his horror that the toys were really alive, which gave him such a fright that he vowed to change his ways.

Oogie Boogie Bash is known for its themed, immersive treat trails that feature Disney Villains from a variety of shows and films. And this year, Sid — the evil kid from the original Pixar Animation Studios movie Toy Story (1995) — will be getting his own immersive treat trail on Pixar Pier. After all, “he tortures toys for fun,” as Rex once said, so it seems pretty appropriate for him to come to the Disney Park this Halloween.

Below is what Disney shared via Disney Parks Blog on Thursday:

Immersive Treat Trails – Team up with your pals and check out the magnificently mischievous treat trails throughout the park featuring Mars Wrigley confectionery products. These trails lead you straight into the clutches of Disney villains – some familiar – some new, including Sid from “Toy Story,” Cruella from Disney’s “Cruella,” and Agatha Harkness from “WandaVision”!

This will be the first time Guests meet Sid at the Disney Parks! Although Guests at Hong Kong Disneyland have had the opportunity to see some of Sid’s rather interesting toys during the Halloween season in the past, Disney theme park Guests have never actually met Sid in person.

Sid is also the first human Toy Story character making a Park appearance, though at this time Disney hasn’t confirmed whether Sid will appear as a face character (like Merida, a Disney Princess and another human Pixar character) or a fur character (like Woody, Buzz, and Bo Peep, other characters from Toy Story who are actually toys, not humans, in the films).

We’re looking forward to seeing just what Sid is like in person at Oogie Boogie Bash – A Disney Halloween Party next month. But for now, it really seems like he’ll be the scariest Disney character of all. Move over, “scary” Godmother!

Below is the official description of Oogie Boogie Bash:

What do you think of Sid, the original Toy Story antagonist, coming to Disney California Adventure at Disneyland Resort this Halloween season? Let us know in the comments!