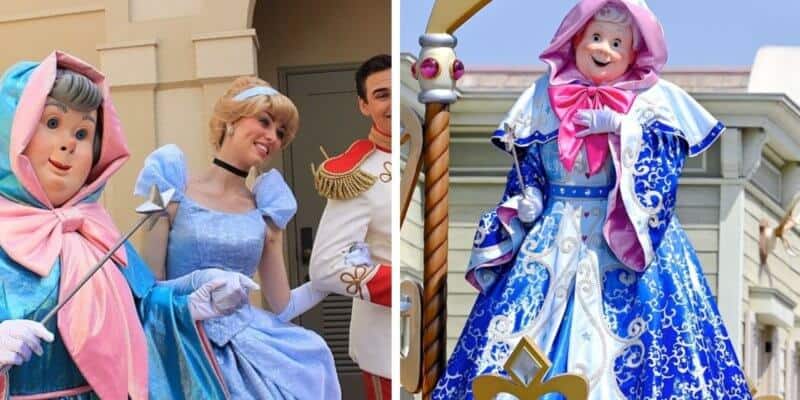 One of the best things about visiting Disney is that Guests get to see and interact with some of their favorite characters. Whether you love the Disney princesses like Belle, Cinderella, Anna, Elsa, Rapunzel, and more, or perhaps some of the Disney villains like Maleficent and Gaston, or even the classics like Mickey Mouse and Minnie Mouse, there is someone there for every Disney fan.

The Fairy Godmother’s look in Tokyo has typically been regarded as “Scary Godmother” as opposed to her given name, due to the slightly terrifying look that her face gives off. If we take a look below, it is easy to see where that opinion may stem from, as the face of Fairy Godmother does look quite different from a typical human face. Personally, I think it’s those dark eyes that get me the most!

That being said, Toyko Disneyland is changing up her look to be a little less “Scary Godmother” and a little more Fairy Godmother.

Today, the Dreaming Up! parade once again debuted at Tokyo Disneyland, and with it, Fairy Godmothers’ newly updated face! Thanks to Instagram user disney_polkadots (@disney_polkadots) who reposted an image by Mezzo Miki, we can see that there has been a big change in Fairy Godmother’s face!

From her new bright eyes, rounder nose, white hair, and rosier cheeks, I think it is safe to say that this Fairy Godmother is a lot less spooky than before.

Asagao (@m_glory_gaogao) also posted a photo of Fairy Godmothers’ new suit as she stands atop her parade float!

It seems Disney is revamping a lot of their characters as we have recently seen Buzz, Woody, and Jessie get a fresh new look at Hong Kong Disneyland as well!

What do you think of the newly updated Fairy Godmother? Is she still scary to you?