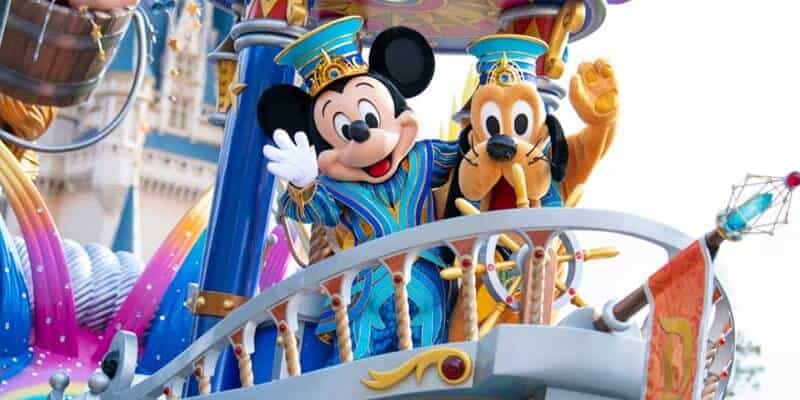 During the ongoing pandemic, the road to magic at the Disney Parks still exists, but it is a different path than Guests are typically used to.

If you are lucky enough to have visited a Disney Park that is currently open, you know that although the music is playing, and the rides are running, entertainment is not the same. For the most part, all meet and greets are more like socially distanced interactions, and at times they are to a larger group of Guests and not individualized for each Guest specifically. This is something we have seen at the Walt Disney World Resort theme parks, for example, with characters at Magic Kingdom greeting Guests from the top of the Walt Disney World Railroad station.

Another big thing that has been missing from many Disney Parks for the past several months is the parades! Typically once or twice each day, daytime parades are held where Guests can see their favorite characters on stunning parade floats with dancers and music that will be stuck in your head for the rest of the day. For the time being, the Disney World theme parks have suspended parades and replaced them with sporadic character cavalcades, but now one Disney Park — Tokyo Disneyland, to be exact — is bringing back their iconic daytime parade!

According to their website, the classic Dreaming Up! parade that Guests know and love will make its grand return this week. The website notes that April 19 is the restart day of the parade, and as of April 20, the parade will run at 1:00 p.m. daily. Please note that, like all Disney Park performances, those times are subject to change, but that is what is currently on schedule.

The parade, which travels throughout the Toyko Disneyland theme park, is said to showcase:

The wonderful world of Disney films unfolds before you in this colorful parade. Mickey Mouse and his Disney Friends will take Guests to a world of dreams.

Alongside Dreaming Up!, Mickey’s Magical Music World and Big Band Beat are also back for Guests to enjoy when visiting Tokyo Disneyland and Tokyo DisneySea at Tokyo Disney Resort.