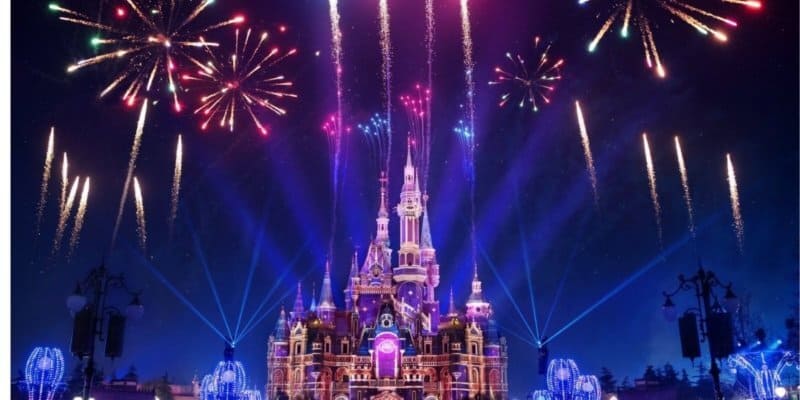 This year will officially mark 50 years since the first fireworks show debuted at Disney Parks! However, that was just the beginning, as Disney continued to innovate and surprise Guests with years of sparkle and light in the night sky.

But before we dive into the new fireworks show, let’s go back a few years to 2011, which marked 40 years of fireworks spectaculars. In this YouTube video below, Special Effects Designer and Principal Fireworks Imaginneer Brad Cicotti explains the history of how these amazing shows are displayed each night.

Shanghai Disneyland Resort opened its gates officially on June 16, 2016, which marked Disney’s first Resort to open in Mainland China. This Resort brought new and exciting lands, with exclusive attractions such as Rex’s Racers in Toy Story Land, Alice in Wonderland Maze in Fantasyland, and TRON Lightcycle Power Run in Tomorrowland.

Shanghai Disney Resort announced that Guests this year will celebrate in a “Year of Magical Surprises” on April 8, 2021. This will be Shanghai’s fifth anniversary and has Disney fans everywhere excited for what’s to come in just a few days.

The “Year of Magical Surprises” will celebrate all year long and will include a spectacular Disney “Surprise Cake Float” leading the Mickey’s Storybook Express Parade. Mickey and Friends will welcome Guests with open arms in their new birthday celebration outfits, and according to the Shanghai Disney Resort website, new entertainment as well:

Up to four times per day, Mickey and Minnie, in their special birthday attire, will present the new Disney “Surprise!” Show on the Pepsi E-stage in Tomorrowland. Along with unique Disney entertainment, selected guests will have an opportunity to spin the Disney Surprise Wheel to win bigger surprises.

But that’s not all because Shanghai Disney is also bringing Guests a new fireworks spectacular! President and General Manager of Shanghai Disney Resort, Joe Schott, shared with Blooloop:

“For our 5th birthday celebration, we wanted to create an exceptional experience for our guests to thank them for making our first five years so memorable.”

Schott said the show is a result of “the talent of over 70 Disney experts and consultants from eight countries”, who have created a “truly immersive and magical conclusion to a day at Shanghai Disneyland”.

In just two days, ILLUMINATE! A Nighttime Celebration will debut in Shanghai Disneyland Park and feature all-new technology and lights as we’ve never seen before. Here’s a sneak peek from Shanghai Disney’s Instagram, which showcases gorgeous diamond shapes cascading over the castle.

These official Disney photos include some spectacular shots of ILLUMINATE! A Nighttime Celebration and may feature many Disney characters and scenes from classic Disney and Pixar films including Brave, Coco, The Lion King, Moana, Frozen, and more.

We will know more about this show when it debuts in the next few days and cannot wait to hear what Guests in Shanghai Disneyland think of this upgraded fireworks show compared to Ignite the Dream – A Nighttime Spectacular of Magic and Light that it will replace.

What is your favorite Disney fireworks show and will you be at the opening of ILLUMINATE! A Nighttime Celebration? Let us know in the comments below!

Are you planning a Disney Parks vacation soon? Our friends can help organize an amazing trip for you. Click the link for more information!

Comments Off on Disney to Debut New Nighttime Fireworks Show