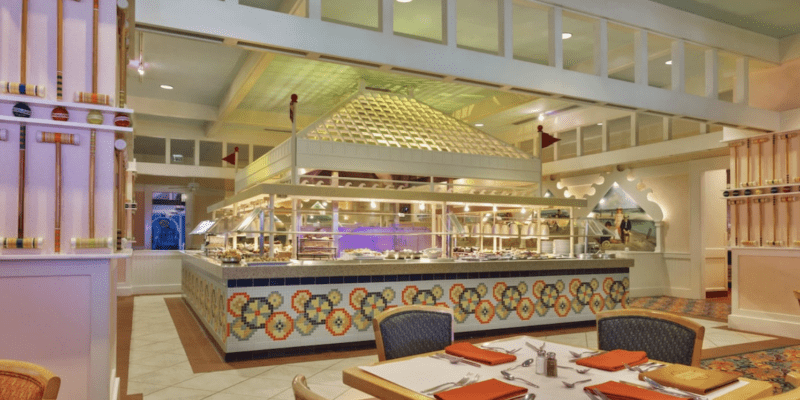 As vaccine rates have increased and COVID-19 restrictions nationwide have been reduced, Walt Disney World Resort has resumed many of its pre-pandemic operations, including buffet dining, in select restaurants.

After almost a year of family-style dining, the Guest-favorite buffet at Cape May Cafe is back, for example, but it is missing one of its most popular items — Cape May’s endless crab legs are officially no more.

Although the crab legs had cost extra while the restaurant at Disney’s Beach Club Resort was serving meals family-style, most Guests presumed they would eventually return to the buffet as normal.

According to Disney World’s customer service phone line, however, endless crab legs are no longer an option. Instead, Guests have the option to “upgrade” their meals for an additional $29.99 per pound of crab legs. Furthermore, Maine lobster now costs an extra $42 per pound.

It is worth noting that both of these fees are added onto the flat $42 adult rate for the dinner buffet.

Related: Is Trattoria al Forno Breakfast Worth It Without Characters?

If you intend to order crab legs for multiple Guests during your meal at Cape May Cafe, keep in mind that each pound will cost an extra $29.99 on your final bill.

This is the latest in a series of price hikes at Disney Parks and Resorts in recent months.

From getting rid of free FastPasses in favor of paid Lightning Lanes to the controversial Genie+ platform to reducing food portion sizes throughout Walt Disney World Resort and Disneyland Resort to seemingly cutting corners in regard to theme park merchandise quality to charging $6,000 for a two-night stay on the Star Wars: Galactic Starcruiser hotel, Disney is overcharging and lowering quality in many fans’ minds.

More on Cape May Cafe

The official description of Cape May Cafe reads:

Join us for an all-you-care-to-enjoy, breakfast buffet! Fuel up for a day of fun and adventure at Walt Disney World Resort. Indulge in popular items like Assorted House-Made Pastries, Omelets, Beef Hash, and of course, Mickey and Minnie Waffles

Or enjoy the feeling of escaping to an oceanside town in New England while you savor a delectable dinner. Buffet offerings include Peel-n-Eat Shrimp, Cape May Clams, Oven Roasted Lemon Chicken and Slow-roasted Strip Loin. Available for an additional fee are Snow Crab Legs (per pound) and Whole Lobster.

What do you think about this price increase at Disney World?