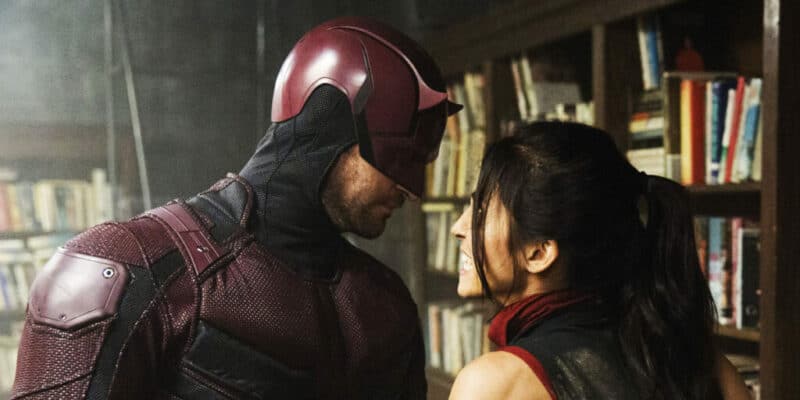 Although Marvel Comics character Elektra has yet to make her way into Kevin Feige’s Marvel Cinematic Universe, there is certainly potential for the popular female super hero to make her MCU debut.

This is especially true given the recent MCU debuts of Daredevil characters Wilson Fisk/Kingpin (Vincent D’Onofrio) and Matt Murdock/Daredevil (Charlie Cox) in Hawkeye and Spider-Man: No Way Home, respectively.

When the Netflix series ended on October 19, 2018, many Marvel fans were disappointed, so most viewers are thrilled that Daredevil is seemingly crossing over into the MCU in a big way. Over the course of three seasons, Cox, D’Onofrio, Deborah Ann Woll’s Karen Page, Elden Henson’s Foggy Nelson had become fan favorites.

Actress Elodie Yung appeared as Elektra in 10 episodes of the popular show.

In the Marvel Comics universe, as well, Elektra is deeply tied to Daredevil, even falling in love with Murdock at one point. As one article notes, “Elektra Natchios is a fictional character appearing in American comic books published by Marvel Comics. Created by Frank Miller, the character first appeared in Daredevil #168.”

Elektra has also been associated with a number of Marvel teams since her first appearance in January 1981. These include the Thunderbolts, Code Red, The Hand, S.H.I.E.L.D., Hydra, The Chaste, Heroes for Hire, the A-Force, and the Savage Avengers.

In one particular comic book issue, “Elektra #3” (2001) — which carried a “Mature/Violent Content” warning on the cover — Elektra appears (presumably) nude in one particular sequence of panels [below].

Marvel’s artists clearly made good use of the dialogue balloons to cover anything untoward in this original version of the comic book.

However, for years afterward, rumors have persisted that Marvel added word balloons to “fix” Elektra’s X-rated lack of attire in a later reprint of these panels. Per one article about the situation:

In reality, though, that was not the case. The original content was both not all that risque and the solutions did not involve word balloons. In actuality, it was the ORIGINAL comic book that used word balloons to cover stuff up, as seen in this panel from the original version of the issue…’

You can see the “fixed” panels, which feature a hint of underwear, below.

A similar treatment was given to another set of panels, in which Elektra is clearly outright naked. You can view the direct comparison below, with the original version first.

Underwear and additional shadows were added to obscure Elektra, but there was, as you can clearly see, no change to the placement of the original word balloons.

As the prior article quipped, debunking the theory that Marvel “fixed” Elektra, “all of the edits were done to the existing artwork and no other changes were made. So no word balloons were harmed in this process.”

Did you know about this Marvel theory?

Comments Off on Did Marvel “Fix” a Popular Character’s X-Rated Scenes With Word Balloons?