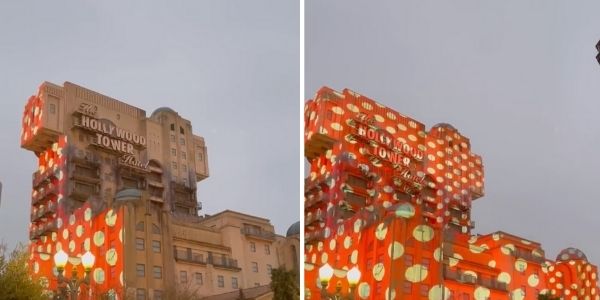 All of the Disney Parks and Resorts tend to change things up in order to keep things fresh for the Guests. From limited-time decorations for Christmas and Halloween to exclusive merch and constantly-changing attractions. Guests can always expect a few new and magical experiences at the Parks. Recently, one of the Disney Parks transformed one of its most iconic rides for a very special holiday.

Disneyland Paris is known by many as one the most beautiful Disney Parks, featuring gorgeous theming and a truly stunning Sleeping Beauty Castle. However, one of the Park’s most exciting thrill rides recently got a makeover in the form of some crazy-cool projection mapping.

In a tweet from DLP Report, Guests can see Disneyland Paris’ Tower of Terror become completely covered in polka dots. See the full tweet from @DLPReport on Twitter below:

As you can see, the Tower of Terror hotel is completely covered in polka dots in order to celebrate Polka Dot Day which occurs every January 22nd.

As stated earlier, all of the Disney Parks and Disney Resorts are constantly changing and evolving. Guests visiting Disneyland Paris soon can expect a complete Marvel takeover very soon when its version of Disneyland’s Avengers Campus opens.

A lot of changes are happening stateside as well, with Disneyland in Southern California getting its own version of the amazing Mickey & Minnie’s Runaway Railway at Disney’s Hollywood Studios. And speaking of Walt Disney World in Orlando, Florida, Guests are also anticipating the release of the new TRON roller coaster at Tomorrowland in the Magic Kingdom and the new Guardians of the Galaxy: Cosmic Rewind at EPCOT.

Have you been to Disneyland Paris before? Are you planning a trip soon? Let us know in the comments below!