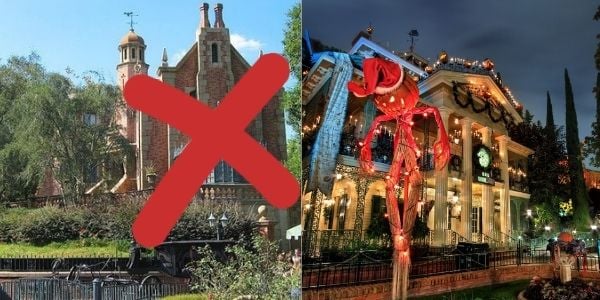 Though Walt Disney World and Disneyland have so much in common, as many Guests may have noticed, one seasonal difference truly sets them apart.

The Disney Parks in Orlando, Florida, share a lot in common with the Parks in Anaheim, California, such as the classic dark rides like Haunted Mansion and Peter Pan’s Flight, the exhilarating space travel of Space Mountain, or the iconic “it’s a small world.” But you ever wondered why Disneyland seems to always get seasonal and holiday rethemes while the attractions at Walt Disney World stay mostly the same.

But during limited-time events and holidays such as Christmas and Halloween, one particular spook-filled attraction at Disneyland gets a special makeover and retheme that isn’t present at Walt Disney World. This, of course, is when The Haunted Mansion turns into “Haunted Mansion Holiday” as a way for Guests to celebrate both the Halloween and Christmas seasons. Taking characters from Tim Burton’s classic film The Nightmare Before Christmas (1993), Disneyland entices Guests to experience all of the thrilling sights and seasonal surprises created by the citizens of Halloween Town. Sally, Oogie Boogie, and other Nightmare nasties will be on hand to wish you “Season’s Screamings!”

This festive overlay is a fan favorite and has proven to be super popular at Disneyland, but those hoping Walt Disney World’s Haunted Mansion will change as well are out of luck, leaving Guests wondering why it doesn’t get this fun change as well.  The simple conclusion many Guests and Disney Theme Park enthusiasts have come to is that while Disneyland is extremely popular, Walt Disney World receives even more Guests per year, meaning the downtime for the ride would be felt in a far greater way. The Disneyland version takes roughly three weeks to fully transform into the festive version, meaning Disney’s Magic Kingdom, one of if not the most-visited theme park in the entire world, would be without one of its most popular rides for nearly an entire month.

Another theory from Guests is that many people would be mad or upset that The Haunted Mansion wasn’t its original version if Guests were to travel to Walt Disney World during the holidays. While fun, the classic exterior, and interior of the dark ride is something that few other attractions seem to capture. While sad for Guests who want Disney World to adopt this seasonal change, there are many exclusive experiences for Guests visiting Walt Disney World when compared to Guests in Disneyland. For one, Disney World offers four gigantic Parks to discover and play in, including Magic Kingdom, EPCOT, Disney’s Animal Kingdom, and Disney’s Hollywood Studios. By far, one of the biggest differences between the west and east coast Disney Parks is the recent addition of Pandora – The World of Avatar, which is an incredible and jaw-dropping experience that immerses Guests into, well, the world of Avatar.

What are your thoughts on the possibility of Disney World’s Haunted Mansion changing for the holidays? Would you like to see the “Haunted Mansion Holiday” or do you prefer that it always stays the same?