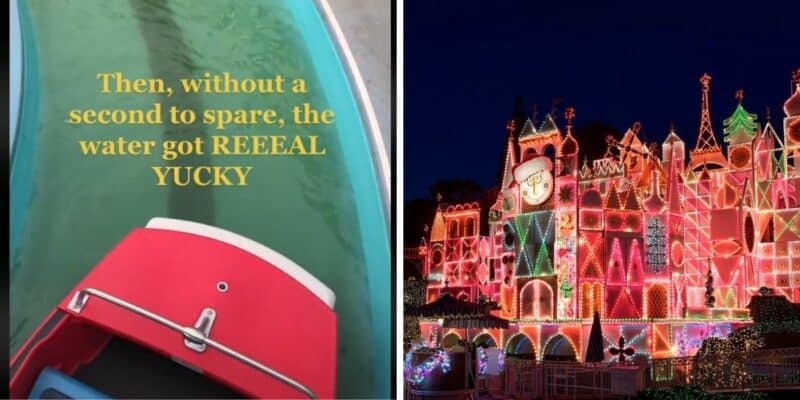 Ah, the smell of Disney water.

It’s something many Disney Guests look forward to –  the unique and nostalgic smell of Disney’s H20 on attractions like Pirates of the Caribbean and Jungle Cruise.

But this famous water is also home to some dirty secrets, dirtiness which has recently closed down the fan-favorite “it’s a small world” attraction in Disneyland.

There are many places Guests can encounter Disney water outside of Disney’s Blizzard Beach or Typhoon Lagoon water parks at Walt Disney World Resort in Florida. Popular attractions like Jungle Cruise and Splash Mountain, as well as transportation options like the boat between EPCOT and Disney’s Hollywood Studios all give Guests a chance to smell that nostalgic odor.

At Disneyland Park, Guests have been enjoying the recent return of the popular boat ride “it’s a small world’ after a festive layover and recent flooding incident.

The Haunted Mansion sees a Nightmare Before Christmas transformation at Halloween that lasts into the Christmas season, while “it’s a small world” features a magical holiday layover as part of Disneyland Park’s new, highly anticipated “Disney Merriest Nites” after-hours event.

The holiday version of “it’s a small world” was supposed to debut on November 11 to Guests for the very first Disney Merriest Nites, then be made available for all Guests as the Disneyland holiday season kicked off during normal operating hours on Friday, November 12.

An unexpected flood changed those plans. The flood happened in the early morning hours on November 10 just before “it’s a small world” holiday was set to make its 2021 Christmas debut at the Anaheim theme park.

The Disneyland Park water ride reopened in all its festive glory on December 6, but it seems the water ride suffers from closures still due to dirty water.

TikTok user Steve Herfkens posted a video this week showing the progressive dirtying of the water at “it’s a small world”, which he claims closed the ride for several hours on December 8:

It’s a Sewage World After All #disneyland #smallworld

It’s a Sewage World After All #disneyland #smallworld #DisneyPlusVoices

Herfkens explains in the video filmed at the Anaheim theme park:

“I was in line for Small World thinking, wow, that water is so clear you can see the bottom! Then, without a second to spare, the water got REEEAL YUCKY. And then the ride closed for a few hours.”

The Disney Guest then goes on to post a second video theorizing what the dirty patch of water could be:

He says in the video that he believes the dirty patch of water was ashes from a Guest:

“The water was just super gross and there was a dirty patch of it that was going around the ride. I kept seeing it as I was in line forever, and then they just eventually closed it and reopened it a few hours later. Everyone thinks it’s ashes but I don’t think that’s what ashes look like when they’re in water, but there’s no oil on this ride.”

It is hard to tell what the dirty area of the water is that closed “it’s a small world”, but many comments on the video speculate that it could be either human ashes, oil, mud, or even human excrement.

On certain rides at Disneyland, like Jungle Cruise, the waters are colored with a chemical dye to keep them darker and help obscure elements like the boat track for the Liberty Belle, or the underwater animatronic parts of an attraction.

Of course, Disney does treat its water with some chemicals to keep it clean and kill off bacteria. Additionally, the water at Walt Disney World gets mosquito killer added to keep the swamp bugs at bay.

Unfortunately, it seems that Disney H20 is impossible to keep clean with Guests seemingly putting their own additions into the water, therefore forcing Cast Members to close attractions like “it’s a small world” at Disneyland.

Note that it’s strictly forbidden to add the remains of loved ones to Disney attractions, but this doesn’t stop many Guests from trying to say goodbye to these ashes in the theme parks. It’s rumored on Haunted Mansion that Cast Members just vacuum these ashes up.

Set sail along a wondrous wintry waterway transformed with whimsical décor. Behold jubilant regional adornments all along your world tour of good cheer. Listen as the costumed chorus of children sings the classic “”it’s a small world” (After All)” song and traditional holiday tunes. The enchantment begins as you approach the iconic façade, which is adorned with thousands of shimmering lights for the season.

Have you ever seen some questionable water on a Disney attraction?