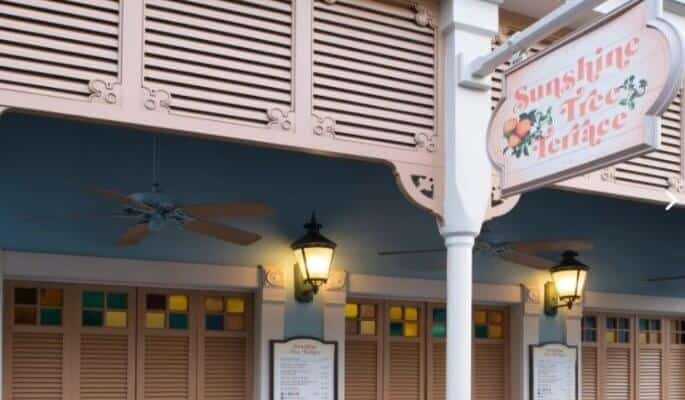 The Jungle Cruise ride in Disneyland and Walt Disney World is becoming a hot topic these days. As Disney fans are just 10 days away from seeing Disney’s Jungle Cruise starring Disney legends Dwayne Johnson and Emily Blunt, Disney Parks are finding ways for Guests to get the full Jungle Cruise experience. And what’s more exciting than Disney treats!

Every skipper on the West Coast has been raving over Disneyland’s Jungle Cruise Dole Whip Pineapple Split that comes served in a collectible Zambesi Zelda Jungle Cruise boat! Not to mention, Disneyland has reopened the rethemed Jungle Cruise attraction in Disneyland Park which has been getting wonderful reviews, so the question is, what about Walt Disney World?

According to the official Walt Disney World website, it looks as though Magic Kingdom has invented a new tropical treat, and it’s dedicated to one of Jungle Cruise’s best jokes, the backside of water!

Over in Sunshine Tree Terrace where the Orange Bird lives, is Disney’s coolest creation, The Back Side of Water Float! This new soft serve snack was inspired by the all-famous Jungle Cruise line “And now, the moment you’ve all been waiting for: the amazing…the colossal…the stupendous…the eighth wonder of the world…the BACK SIDE OF WATER!”

Although this summer treat isn’t available to order as of yet, the description of it on the menu sounds enticing as Disney states:

Back Side of Water
Cotton Candy and Vanilla Soft-serve, Sprite®, and a Sour Belt

This is a limited-time offer and with its debut on the menu, we speculate this delightful treat will be ready to enjoy very soon, so check in with Sunshine Tree Terrace for more information!

Located inside Adventureland, Sunshine Tree Terrace is known for its original Citrus Swirl Soft-serve, which many Disney fans compare to an orange creamsicle.

This location is only offered in Walt Disney World with many interesting floats including the I Lava You Float with Fanta Strawberry Soda and Passion Fruit swirled with DOLE Whip, Orange, and topped with bright-colored Popping Candy!

Looking for more Disney World floats? Aloha Isle is Dole Whip heaven, and Storybook Treats is home to the Peter Pan float that offers one of Florida’s favorite flavors!

Are you excited to see the Back Side of Water treat in Walt Disney World? Should it come with a souvenir? Let us know your thoughts in the comments below!

Comments Off on Jungle Cruise Inspires a NEW Treat Called The Back Side of Water Float!