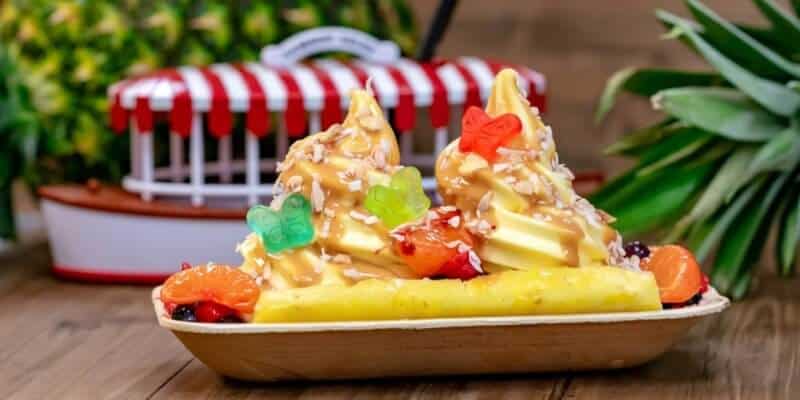 Let’s set sail for the tastiest cruise of Disneyland Park! The newest treat to leave the pair of docks is a Disney’s Jungle Cruise-inspired Dole Whip Pineapple Split. The summery dessert sold only on the West Coast has tons of exotic flavor and will be a must-try for any pineapple whip fan.

Served in a collectible Zambesi Zelda Jungle Cruise boat, the Dole Whip Pineapple Split can also be served in a disposable boat, leaving your red and white canopy clean and ready to depart.

Sold exclusively at the Tropical Hideaway (next door to the Jungle Cruise ride entrance) this banana split gone island inspiration ditches the banana and tosses in slices of fresh pineapple. Then, giant swirls of delicious Dole Whip (a dairy-free soft serve ice cream) are laid on top.

The Dole Whip Pineapple Splits is currently being served in the Jungle Cruise boats, so get your speed boat on over to Adventureland to grab one!

If you’re a Dole Whip fan in general, you’ve surely tried all the incarnations of the pineapple dessert. There are so many flavors, we’re always adding to our Dole Whip Guide. Check it out and see what flavors you’re missing out on!

Will you be boating over to Disneyland Park to get one of these Dole Whip Pineapple Splits? Leave us a comment below!