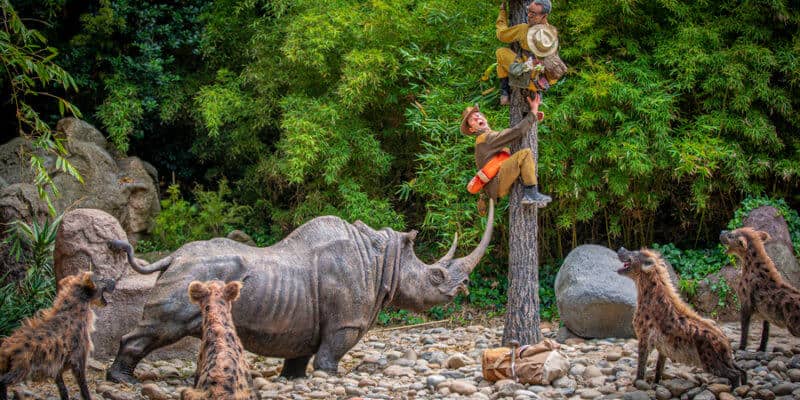 Though the attraction had a surprise soft opening ahead of its official reopening day, it was still listed as “Closed for Refurbishment” on the Disneyland app — until now. As of Friday, July 16, the world famous Jungle Cruise is departing daily with tours through the rivers of Adventureland at Disneyland.

Disney Parks Blog shared a celebratory post in honor of the grand reopening of the historic attraction. In the blog post, you will read that, for the first time, a Disney Cast Member is actually featured on a ride!

The newly-enhanced Jungle Cruise attraction officially opens to explorers today, July 16, and the mischievous wildlife are ready at Disneyland park! Disney Imagineers have taken a deeper dive into the backstory of the comedic characters, safari adventurers and tour guides you will meet on their journey through the jungle.

For the first time in Disney history, a cast member is featured in a Disney park attraction – a Jungle Cruise skipper! Travelers will find a rhinoceros pointing the way to Ill-fated skipper Felix as his passengers pass him by, up a pole!

Watch a video showing clips of the enhanced Jungle Cruise at Disneyland below:

The attraction is also being reimagined at Magic Kingdom Park, though it did not close for refurbishment while Disney added the enhancements and new scenes to the ride. Disney shared that the Magic Kingdom version of the attraction at Walt Disney World Resort in Florida is not yet fully complete but will be soon.

Read the official description of the Jungle Cruise attraction, per the Disneyland website, below:

Head off to Adventure
Board a canopied tramp steamer and leave civilization behind on a tongue-in-cheek journey through the globe’s most “treacherous” rivers—and oldest gags.

A Classic Cruise
The original Jungle Cruise opened on July 17, 1955 at Disneyland Park. Based on Disney’s award-winning True-Life Adventure films, the attraction had a more educational tone. In the early 1960s, Walt Disney introduced more drama and asked animator Marc Davis to sketch some humorous gags.
Over the years, more “wildlife”—and new wisecracks—were added. These updates, along with our talented skippers, make for fun surprises on every trip down the river.

Are you excited to experience Jungle Cruise with all-new scenes at Disneyland and Disney World? Let us know in the comments!