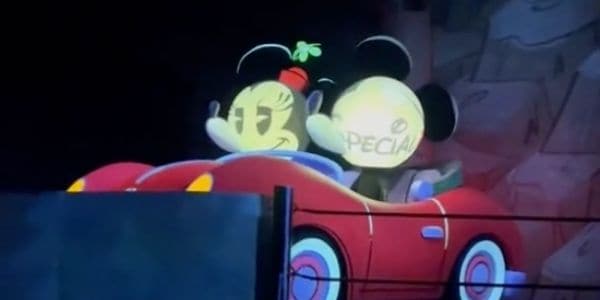 While Disney World is “The Most Magical Place on Earth”, this doesn’t mean that the Parks and Resorts don’t encounter any issues. From Typhoon Lagoon closing to Guests being forced to evacuate Splash Mountain, not everything can go perfectly all of the time. And speaking of things not going perfect, Guests recently caught a bizarre glitch happening on one of Disney World’s newest rides.

Located in Disney’s Hollywood Studios, Mickey & Minnie’s Runaway Railway is an ambitious and “first of its kind” attraction that stars Mickey Mouse himself. The ride incorporated tons of complex and high-tech features like projection mapping and a trackless ride system not seen in many other Disney rides. Due to the complexity of this attraction, however, it is prone to occasional glitches and occasional downtime.

One Guest recently captured a rather bizarre glitch while on the ride recently, posting the video to TikTok. Hunter (@idreamofdisneyworld) showed a section of the ride toward the beginning where Mickey and Minnie’s faces seem to go missing. Take a look below:

Along with the glitch, the Guest also throws shade toward the ride, claiming The Great Movie Ride Never had issues like this one. To many fans dismay, Mickey &  Minnie’s Runaway Railway replaced the iconic Great Movie Ride attraction in Disney’s Hollywood Studios. This attraction took Guests on a journey through their favoirte films like Alien (1979), The Wizard of Oz (1939), Raiders of The Lost Ark (1981) and many other classic movies.

Mickey & Minnie’s Runaway Railway has proved to be a popular attraction at Walt Disney World and is currently being constructed at Disneyland in California. As stated above, the ride uses a trackless ride system similar to what can be found in Remy’s Ratatouille Adventure in EPCOT and Star Wars: Rise of the Resistance in Disney’s Hollywood Studios.

While you are at Disney’s Hollywood Studios, you can enjoy Tower of Terror and Rock ‘n’ Roller Coaster Starring Aerosmith on Sunset Boulevard. By the Chinese Theater, Guests prepare to ride Mickey & Minnie’s Runaway Railway. In Toy Story Land, Slinky Dog Dash always boasts a long line with others shooting their shot on Midway Mania or spinning their brains out on Alien Swirling Saucers. Of course, you have to visit Star Wars: Galaxy’s Edge for some blue milk, or green milk, Rise of the Resistance, Smuggler’s Run, and the upcoming Star Wars: Galactic Starcruiser!

Have you ridden Mickey and Minnie’s Runaway Railway yet? What do you think of this attraction? Let us know in the comments below!