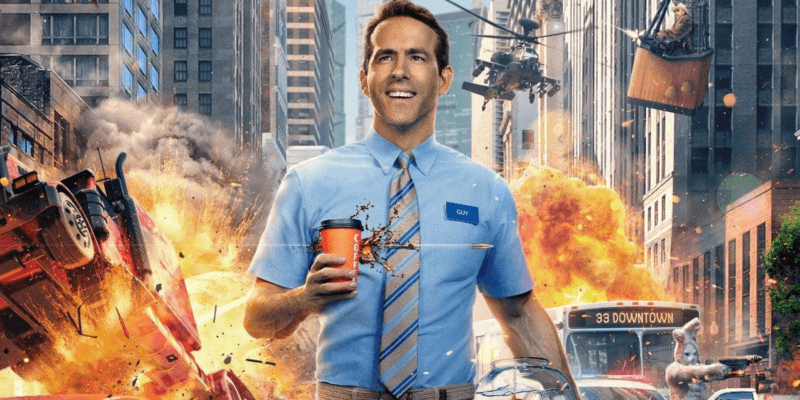 He’s one step closer to becoming a Disney “prince”.

Now, Disney has revealed when Reynolds’s comedy-adventure movie Free Guy (2021) will be released on Disney+.

When The Walt Disney Company acquired 20th Century Fox, now 20th Century Studios, back in 2019, many Disney and Marvel fans questioned whether Reynolds’s R-Rated Deadpool films would transition into the family-friendly Disney catalog and MCU franchise.

Reynolds is known for his explicit comedy, wittiness, and his one-of-a-kind personality, as well as his Aviation Gin ownership and amusing approach to his relationship with his wife, Blake Lively.

With the reveal of Free Guy‘s release date on Disney+ today, it seems Ryan Reynolds is now part of the Disney family, with the movie produced by 20th Century Fox but now part of Disney thanks to the acquisition.

The adventure comedy will be available for all Disney+ subscribers to watch on February 23, 2022.

The movie follows Guy, the protagonist of the film played by Reynolds, who is a bank teller. Guy soon discovers he’s actually an NPC (Non-Player Character) inside a brutal and open-world video game.

Free Guy was released in theaters on August 13 and has grossed over $330 million worldwide to date, winning a People’s Choice Award for The Comedy Movie of 2021 and a Critics Choice Award nomination for Best Comedy.

The movie was meant to be released by Disney-owned 20th Century Studios back on December 11, 2020, but the theatrical release was delayed due to the ongoing COVID-19 pandemic.

In a hilarious teaser for the movie back in 2019, Reynolds attempted to fit in with the Disney family as he offered limited-time deals on some of the merchandise from the upcoming film, including the Authentic Guy Blue Shirt and the Authentic Guy Collectible Tie.

In addition to revealing the Free Guy release date, Disney+ has also released a new video highlighting all of the content that will be available in 2022.

The special preview, which you can watch below, gives Disney+ subscribers a look at some of the most highly-anticipated original and library titles coming next year, including Free Guy, Marvel’s Eternals (2021), Ms. Marvel, She-Hulk and Moon Knight, The Book of Boba Fett, The Proud Family: Louder and Prouder, Hocus Pocus 2 (2022), Limitless with Chris Hemsworth, Obi-Wan Kenobi, and more.

Disney also confirmed that Marvel Studios’ animated Guardians of the Galaxy spinoff I Am Groot is set to release sometime in 2022.

Marvel fans are still waiting for news on what Kevin Feige’s Marvel Cinematic Universe will do now that it has acquired Ryan Reynolds’s Deadpool character. With its dark comedy, it will be interesting to see if Marvel Studios will produce Deadpool 3 in the same style, though former Disney CEO, Bob Iger, said that Disney would keep the next Deadpool installment R-Rated.

While we await news on the future of Deadpool in the MCU, we can enjoy Reynolds’ debut on Disney+ in February 2022, and the exciting premiere of Tom Holland’s Spider-Man: No Way Home (2021) in cinemas this week.

You can watch Disney’s preview of 2022’s streaming debuts below:

What are you most excited about on Disney+ in 2022? Let us know in the comments.