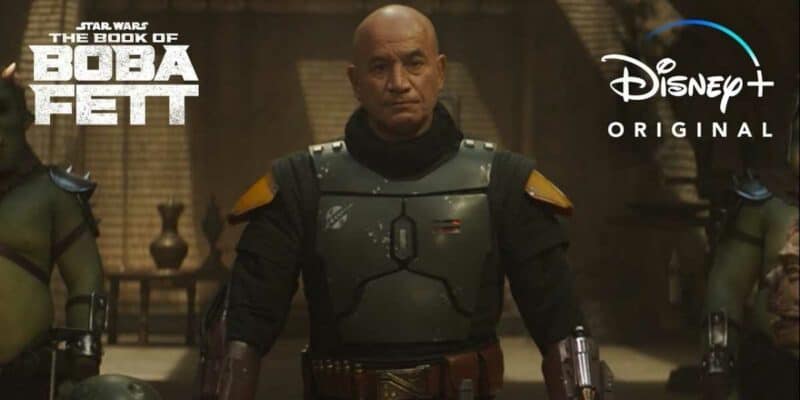 With just 21 days until we FINALLY have a chance to watch the highly-anticipated, The Book of Boba Fett series coming to Disney+, Star Wars has shared another look into the new original series that is slightly different from the first trailer… but just as exciting!

As we’ve been missing new The Mandalorian content on Disney+, we’re thrilled the streaming giant will once again welcome a dose of Star Wars to fill our screens. On December 29, 2021, Disney+ will stream the newest Star Wars series featuring the mysterious bounty hunter, Boba Fett.

Every possible rumor has been swirling around what the new series will hold, but we’ll need to wait until December 29 to learn what may unfold. In the meantime, we’re thrilled Star Wars is dishing out another sneak peek of what to expect from the series.

Star Wars released its newest trailer, The Return: The Book of Boba Fett with the following description and trailer below:

This month, return to the sands of Tatooine. The Book of Boba Fett, an all-new Original series, starts streaming December 29 on @DisneyPlus.

“The Book of Boba Fett,” a thrilling Star Wars adventure teased in a surprise end-credit sequence following the Season 2 finale of “The Mandalorian,” finds legendary bounty hunter Boba Fett and mercenary Fennec Shand navigating the galaxy’s underworld when they return to the sands of Tatooine to stake their claim on the territory once ruled by Jabba the Hutt and his crime syndicate.

Will you be watching The Book of Boba Fett when it launches on December 29? Let us know in the comments.