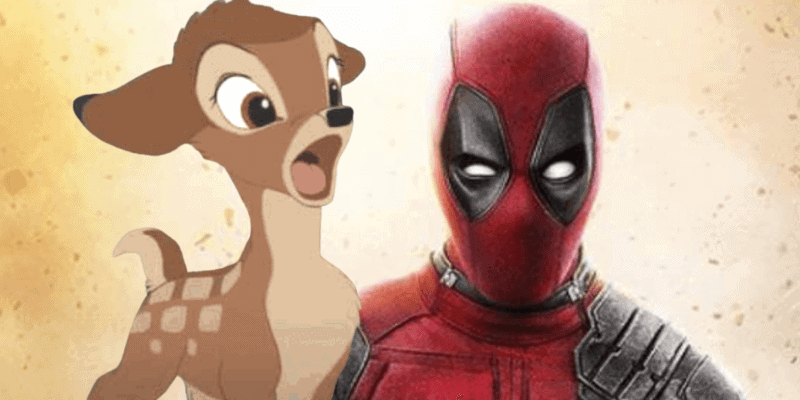 Ryan Reynolds is officially a member of the Marvel Cinematic Universe. He made his debut in the most Deadpool/Wade Wilson way possible – in a trailer for Ryan Reynold’s upcoming Free Guy movie where he sat down with costar Taika Waititi’s Korg. While fans may have to wait until late 2023 for Deadpool 3, Ryan Reynolds is full of ideas for what the Merc with a Mouth could be up to in the meantime. And, he REALLY wants to team up with Bambi.

Ryan Reynolds recently sat down with IGN to share his pitch for a Deadpool/Bambi short film:

I wanted to do a short film of Deadpool interrogating the hunter who killed Bambi’s mom. But the whole gist of it is that Deadpool is actually just a huge fan. He’s not interrogating — he just wants to know how he could be the most loathed Disney character in the history of Disney… and of course, Disney was like, ‘well, I don’t think that’s ever going to happen.’

I know what you’re thinking. Ryan Reynold is nuts. And, this isn’t even the first time that he has brought up wanting to take on the hunter from 1942’s Bambi. Back when Disney first acquired 20th Century Fox and Marvel Boss Kevin Feige confirmed Deadpool 3 would be R-rated, Reynolds celebrated on Instagram with this post where he proclaimed:

Clearly, Ryan Reynolds was traumatized as a child by what is considered the saddest moment in Disney history. And he is more than willing to use Wade Wilson to get revenge.

Ryan Reynolds has pushed the boundary with Disney before when the Disney Fox Merger was first announced. He joked on Twitter that it was:

Time to uncork that explosive sexual tension between Deadpool and Mickey Mouse.

Time to uncork that explosive sexual tension between Deadpool and Mickey Mouse. https://t.co/iUEXofWpRu

While his idea seems out of this world there actually is precedent for it in Marvel Comics. Deadpool’s fourth-wall-breaking shenanigans have taken the mutant mercenary on many wild adventures. In Deadpool: Killustrated (2013) by Cullen Bunn, Wade Wilson realizes that everyone in the Marvel Universe is trapped in an endless cycle of death and rebirth because they are all fictional characters.

So, naturally, he decided to kill EVERY fictional character ever by traveling through the Nexus of All Realities. Some of his victims of note include Don Quixote, Moby Dick, and poor sweet Pinocchio.

There is even some precedent for Deadpool interacting with cartoons in live-action. In the first Deadpool (2016), when he suffers severe brain damage, he hallucinates cartoons surrounding him. Deadpool’s fourth-wall-breaking ability lends itself to many possibilities. Including jumping into other properties.

Certainly, the Canadian actor — who is married to actress Blake Lively — knew that pitching a dark team up with a children’s cartoon character would get a hard “no” from the House of the Mouse but it is certainly a fun idea. Perhaps they can work in an Easter egg in the rumored Deadpool animated series that is in development.

But Deadpool is still a long round away from joining the MCU. It’s in early production with Bob’s Burgers’ Molyneux sisters, Wendy Molyneux and Lizzie Molyneux-Loeglin, confirmed as writers back in November, but Deadpool 3 is still looking for its director.

As of right now, Wade Wilson is the only character that Marvel Studios has confirmed will be making the jump from Fox’s X-Men franchise to the MCU. Although fans are still holding out hope for Hugh Jackman to come back one more time as Logan AKA Wolverine.

Let us know in the comments if you think Disney should take a chance on Ryan Reynold’s idea to team up with Bambi in a short animation.