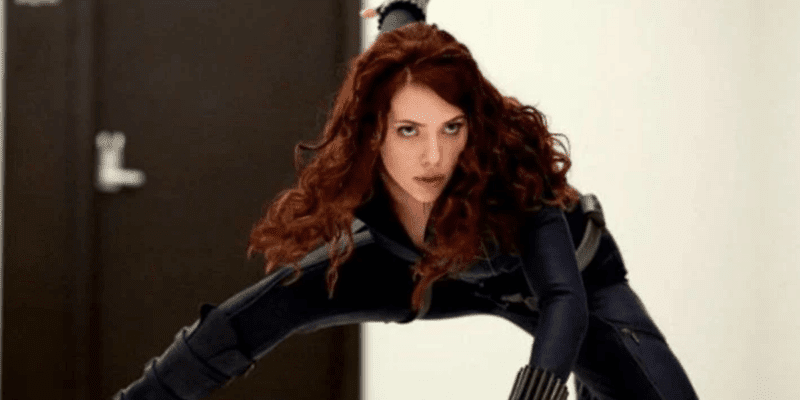 Black Widow is finally out. Marvel fans have waited long enough to return to the Marvel Cinematic Universe – over two years, in fact. There has been a lot of controversy about the day-and-date release which has Scarlett Johansson suing Disney for $50 million dollars that she believes she lost when it came to Disney+ the same day as it hit theaters.

Regardless of how you feel about the case and how you saw the Marvel movie, there is one joke from Yelena Belova (Florence Pugh) that has fans talking. She rightly pointed out how ridiculous Natasha Romanoff AKA Black Widow (Scarlett Johansson) looked in her superhero pose, sliding on her knees and flipping her.

Deadpool (2016) starring Ryan Reynolds as Wade Wilson AKA Deadpool — already established that the classic superhero landing is hard on the knees.

Yet Marvel Studios shows it time and time again. The superhero pose took off in Iron Man (2008) when Tony Stark AKA Iron Man (Robert Downing Jr.) triumphantly debuted. He’s basically made the superhero landing pose a staple — it’s how he enters many of his scenes.

At least Iron Man had his armor to cushion the impact. And his fellow Avengers followed suit. Peter Parker AKA Spider-Man (Tom Holland) pulls it off when he takes the shield from Steve Rogers AKA Captain America (Chris Evans) in Captain America: Civil War.

Related: When Will Taskmaster Reappear in the MCU?

Thor (Chris Hemsworth) has his best attempt at the superhero landing in Thor: Ragnarok (2017). He looked a little more majestic in the slow-motion build-up to the superhero pose. Maybe he should stick with the traditional power pose that Peter Quill aka Star-lord (Chris Pratt) tries to copy from him when the God of Thunder meets the Guardians of the Galaxy. Power posing does increase confidence.

And T’Challa AKA Black Panther (Chadwick Boseman) has an epic version in Avengers: Infinity War (2018). He looks regal.

Yelena ended up posing the same way as Natasha, but the moment was lampshaded in Black Widow. But while it’s silly, the Avengers certainly pull it off — it’s actually a matter of who executed it the best.

Florence Pugh revealed how the joke came to be in an interview with The Hollywood Reporter:

“I was like, ‘I know! Who would actually land like that? That’s ridiculous!’ And they were like, ‘Well, yeah. If she actually landed like that, she would have broken her spine.’ And I remember I was just teasing [Scarlett] for it, and Eric [Pearson], the writer, was on set and was like, ‘Yep, that’s going in the script!'”

What Else Is There Beside the Superhero Landing?

But the superhero landing isn’t even the only repeated pose that Marvel fans have poked fun at. One that has been dubbed the Super Hero Holds Two Things Together Pose (or SHHTTTP for short) has also been littered throughout the Marvel Cinematic Universe.

The best version of this pose is probably the first appearance by Steve Rogers in Captain America: The Winter Soldier (2014) when he holds on to a building and a helicopter to stop James Buchanan “Bucky” Barnes AKA Winter Soldier (Sebastian Stan) from escaping.

Related: Marvel Sets Up to Kill Spider-Man, Bring Back Their Most Reviled Character

Peter Parker does it twice, both in Spider-Man: Homecoming (2016) to hold the two sides of the ferry together, and again, in Infinity War to try to save Doctor Stephen Strange (Benedict Cumberbatch) from being beamed up. Peter even made this pose famous back in Sony Picture’s Spider-Man (2002) when Toby Maguire played the character.

Thor is most ridiculous when he holds open the eye of Nidavellir, mostly because the energy is enough to kill someone but somehow never burns his clothes. I guess that really is fine Asgardian leather.

But What Is the Dumbest Pose in the Marvel Cinematic Universe?

Loki (Tom Hiddleston) may be taking Disney+ by storm with his new original series, but his signature move has been a meme for years. The Loki Hair Flip is a big thing on the internet.

The God of Mischief is always trying to get his hair out of his eyes in the most dramatic fashion. It’s been made all the more hilarious since the female Loki variant, Sylvie (Sophia Di Martino) remembers to tie her hair up before she gets into battle.

It definitely seems to add credence to Yelena’s claim that Natasha Romanoff and the Avengers are posing because they think people are watching them. Loki always wants to be the center of attention.

Black Widow is currently streaming on Disney+ for Premier Access for $29.99. It has set the pandemic box-office record and is still going strong. Marvel fans already want more from characters like Alexei Shastakov AKA Red Guardian (David Harbour) and Melina Vostokoff AKA Black Widow (Rachel Weiss).

We know that we will be seeing Yelena again on the new Hawkeye series thanks to that post-credit scene. And she may be joining the Dark Avengers alongside John Walker aka U.S. Agent (Wyatt Russel) from The Falcon and the Winter Soldier.

The latest Marvel movie is a prequel film set after the events of Captain America: Civil War (2016) and is officially described by Marvel as:

Let us know in the comments if you think the Super Hero Holds Two Things Together Pose is dumber than the Superhero Landing Pose.