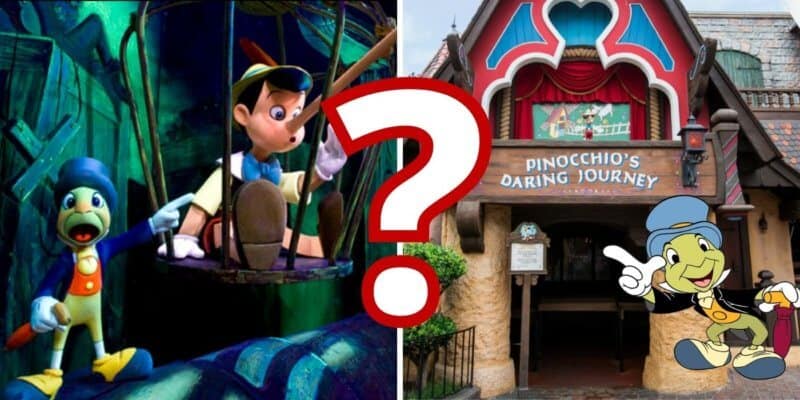 Disneyland has so many attractions that have been at the park since opening day. But as “Disneyland will never be completed,” will Imagineering consider reimiagining older, opening-day attractions from Walt Disney’s time?

Pinocchio’s Daring Journey is a classic attraction located in Disneyland park, beloved by so many longtime fans. In case you aren’t familiar, Disney describes this attraction as:

Hop aboard a woodcarver’s cart at the Stromboli Puppet Theatre, where Pinocchio is singing and dancing in a festive marionette show.

Related: Some Now Calling For Re-Theme of Pinocchio’s Daring Journey

This attraction remains popular year after year, as it tells the story of the classic animated film, Pinocchio. However, one Disney fan is sharing their ideas on how Disney could improve and reimagine Pinocchio’s Daring Journey, keeping the idea of the attraction the same but updating its story to keep it feeling new and alive.

Reddit user TheFett posted an entire opinion post to the platform, arguing that Disney could reimagine the ride to include the iconic voice of Jiminy Cricket as the narrator of the attraction. On top of this, they mention how we could go back to Walt Disney’s idea of having a land of miniatures, where Guests feel like they are shrunk down — perhaps Disney could do this for Pinocchio’s Daring Journey and have Guests feel as though they are actually the size of Jiminy Cricket!

Let’s consider an alternative: we could change up the tone and atmosphere by putting the rider in the shoes of Jiminy Cricket. One of Walt Disney’s ideas for Disneyland was a land of miniature, where children could feel like giants walking among the small models. This idea later became Storybook Land Canal Boats. What if we did the opposite, and made the rider feel smaller?

The Reddit user goes on to share some amazing ideas for a reimagined Pinocchio’s Daring Journey, writing:

Example: the first big setpiece of the movie is Geppetto’s workshop, full of imaginative cuckoo clocks. This is missing from the ride. In my version, the first room is a very chill scene where you glide past several larger-than-life cuckoo clocks, all very detailed and fully functional. Maybe you slow down to face a whistling figurine, [practically inviting the rider to make out with it.]

You go past Pinocchio’s wooden puppet form, looking enormous from our viewpoint at table-level, and his face “comes to life” via Pepper’s Ghost effect. Using perspective tricks, the Blue Fairy leans down towards us, asking us if we would like to be his conscience and batting her lashes so that we can’t refuse.

We then go to a scene in which we’re chasing Pinocchio as he is led astray by Honest John while singing “Hi-Diddle-Dee-Dee.” I’d like to have fun making the scene look like we’re viewing it from street level.

THEN we go to Stromboli’s Puppet show, song changes to “I Got No Strings”, and huge reading glasses come down in front of the rider’s vehicle so that they can get a really good look at those French can-can puppets

Now we do Pleasure Island (abridged in my version), you’re surrounded by discared popcorn buckets and candy wrappers and everything seems to loom above you. Cut the donkeys and carriage driver part, it’s too much. Instead, a brief under-the-sea trip with a seahorse and lively fishies before Monstro’s enormous mouth seems to lunge at you as you fall through his teeth and wind up in Gepetto’s cottage where the end scene plays out much like it currently does. You, the rider, are thanked as you pass a “mirror” where you see yourself as Jiminy Cricket, complete with solid gold medal.

This Reddit user really put some thought into this idea and completely reimagined the entire attraction, keeping some old elements but also incorporating new ideas that can continue Disney’s legacy in a new and improved way. You can read the entire post here:

Opinion: Pinocchio’s Daring Journey would have been better if it were told from Jiminy Cricket’s perspective from Disneyland

Disney has not said that anything is planned for Pinocchio’s Daring Journey at Disneyland. However, it wouldn’t be out of the norm for the ride to be reimagined, even just to make it less scary. It has just been revealed that Snow White’s Scary Adventures will be renamed to Snow White’s Enchanted wish, and all-new scenes are coming to this classic Disneyland Attraction. Read all about it here.

What do you think? Should Disney reimagine Pinocchio’s Daring Journey to include Jiminy Cricket’s voice as the attraction narrator? Let us know in the comments below.