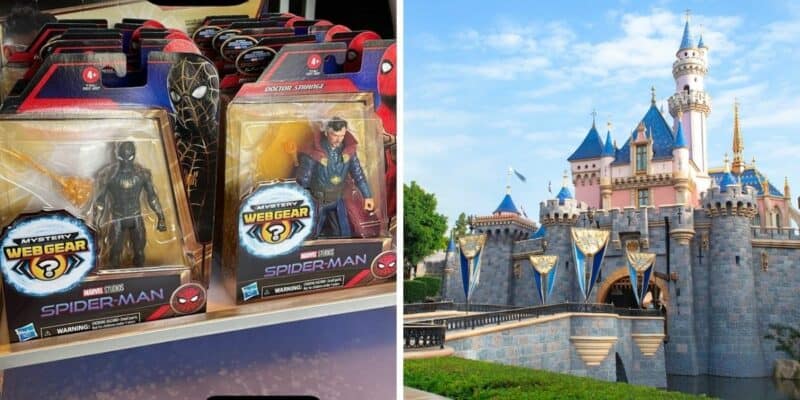 There has been intense speculation the last few months over the plot and cast for Kevin Feige’s upcoming Marvel Cinematic Universe movie, with Marvel fans anxious to see if Tobey Maguire and Andrew Garfield will be making an appearance.

Now, Disneyland Resort has started to sell official merchandise for the MCU movie as the premiere date fast approaches.

Every Marvel fan is ready to see the Sinister Six from Marvel Comics make their live-action Marvel Universe debut in No Way Home and take on Tom Holland’s web-slinging Avenger.

The official trailer for Jon Watts’ No Way Home broke the internet last month, with the third installment of Tom Holland’s Spider-Man movie saga breaking records already before it’s even been released.

Recent merchandise has revealed (maybe intentionally) hints about the upcoming Tom Holland movie.  No Way Home merchandise designs were released featuring propaganda drawings of Mysterio’s classic helmet and two hands with an eye in the center of each, while a new poster seemed to reveal Tobey Maguire’s casting.

Marvel fans have been eagerly awaiting official merchandise from the upcoming Spider-Man movie, and now it seems the Disney theme park is finally starting to sell some goodies from Marvel Studios.

Located in Tomorrowland at Disneyland Park in California, Star Trader sells an assortment of Star Wars merchandise, Disneyland keepsakes and intergalactic gifts – and now, items from Spider-Man: No Way Home.

Spotted by Rudio.1, the Disney fan shared on Instagram a photo revealing that Disneyland Resort is now selling action figures from the upcoming MCU movie.

Seen in the photo are toy figures of both Tom Holland’s Spider-Man and Benedict Cumberbatch’s Doctor Stephen Strange, with Spider-Man appearing in the new gold on black suit being introduced in No Way Home.

Keep up to date with Inside the Magic to see more merchandise and news from Spider-Man: No Way Home as we approach the December 17 release date of the Marvel movie.

Will you be buying No Way Home merchandise? What are you most excited to find?

Comments Off on ‘Spider-Man: No Way Home’ Merchandise Drops at Disneyland