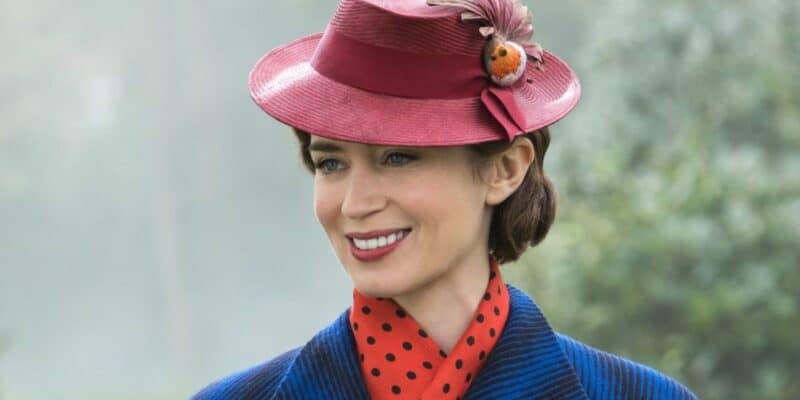 We love a good fan theory, and there’s nothing more fascinating than the possibility of two completely separate IPs being connected! We already know that Star Wars shares the same universe as two other iconic franchises, but what about the Wizarding World? Are there any other franchises that might be set in the same world as Harry Potter?

An increasingly popular fan theory suggests that there is one that could easily fit into the magical world created by J. K. Rowling – and it just so happens to be Walt Disney’s Mary Poppins! But how? Well, it would seem that everyone’s favorite British nanny actually learned all her magic abilities at Hogwarts School of Witchcraft and Wizardry!

So forget the Boy Who Lived – here are seven facts that prove Mary Poppins is the Nanny Who Lived!

One of the first charms Harry Potter (Daniel Radcliffe) learns at Hogwarts is a Levitation Charm. With the swish and flick of a wand, accompanied with the words “Wingardium Leviosa“, a witch or wizard can make an object of their choice levitate. And that object can be anything, from something as light as feather to, say, a bed with two children sitting on it!

In the original Mary Poppins (1964), the titular nanny (Julie Andrews) does just that, when she takes Jane and Michael Banks (Karen Dotrice and Filipp Rukavishnikov) to see her Uncle Albert (Ed Wynn). While she doesn’t say “Wingardium Leviosa“, as an expert witch, she wouldn’t need to utter the words to perform the charm. But where is her wand..?

6. She Has a Hidden Wand

In the Wizarding World, every witch and wizard is equipped with their very own wand, with which they can perform a number of charms, spells, and curses. But if Mary Poppins is indeed from Hogwarts, then why doesn’t she have a wand? Even Hogwarts gamekeeper and groundskeeper Hagrid (Robbie Coltrane) has a wand – it’s just hidden inside his magic umbrella.

So is it possible that Mary Poppins also has a wand hidden inside her magic umbrella? We think so! After all, she takes it with her everywhere she goes, it can speak to her, and it even grants her the power of flight, which means that she’s probably performing a Levitation Charm on herself. And if her umbrella isn’t concealing a wand, then it must either be a Portkey or a broomstick!

Besides her magic umbrella, Mary Poppins is probably best known for her bottomless magic bag, which is able to hold all sorts of items, including large ones. This is easily one of the biggest giveaways that she’s from the Wizarding World because, in Harry Potter and the Deathly Hallows, we learn that Hermione (Emma Watson) has the same kind of bag.

While on the run with Harry and Ron (Rupert Grint), Hermione’s bag comes in handy for storing a wealth of much-needed items. And even though it’s not the bag itself that’s magic, as she admits to having placed an Undetectable Extension Charm on it, what’s to say that Mary Poppins hasn’t done the same thing with hers?

Immortality isn’t something that’s necessarily associated with Hogwarts or the Wizarding World, but witches and wizards are known to live quite a bit longer than Muggles. This could explain why Mary Poppins hasn’t aged a bit when we’re reunited with her in Walt Disney’s Mary Poppins Returns (in which she’s played by Emily Blunt), which takes place 25 years after the original.

Or, maybe she has, at some point in her life, acquired the Sorcerer’s Stone, or even one or all three of the Deathly Hallows! Is it possible that Mary Poppins has achieved what Lord Voldemort (Ralph Fiennes) himself could not? Come to think of it, we wonder if her ability to speak to animals extends to snakes…

There are a few scenes in Mary Poppins and Mary Poppins Returns (2018) in which the nanny appears out of the blue or disappears to various locations (including the iconic bathtub scene in the sequel). But where did she learn this magic? The answer is Hogwarts, of course, because the art of ‘appearing’ and ‘disappearing’ is known as Apparating and Disapparating.

This is something only older students at the school can learn, and we first see Fred and George Weasley (Oliver and James Phelps) using it in Harry Potter and the Order of the Phoenix. For many older students and adults, it’s a common method of moving around, which appears to be the case for Mary Poppins too (when she’s not using her umbrella, of course).

Self-Cleaning Charms are frequently used throughout the Harry Potter franchise, as it’s undoubtedly one of the more useful spells a witch or wizard can use from day to day (if there’s one type of magic we wish was real, it would be this). And to no surprise, Mary Poppins uses this spell when she helps clean up the Banks children’s bedroom!

While Jane and Michael do end up getting involved, seemingly using their own magic to put things away, it’s possible that they’re actually Muggle-born magic folk, and are able to pick up these basic spells from Mary Poppins. Or perhaps the nanny is simply allowing them to think they’re performing the magic themselves!

Throughout the Harry Potter series, witches and wizards are very discreet about using magic when moving around in the Muggle world – unless it’s absolutely necessary. Such an act is even illegal and can result in the expulsion of a student from Hogwarts, or jail time at Azkaban for an adult offender.

While there are many occasions in which Mary Poppins performs magic in front of the Banks children (both generations), there are also times when she’s rather discreet about using magic in public. “I have no intention of making a spectacle of myself, thank you,” she tells chimney sweep Bert (Dick Van Dyke) in the original film!

There are many more tell-tale signs that Mary Poppins is from the Wizarding World, from enchanted paintings and mirrors to the ability to distort reality. And to quote Mary Poppins author P. L. Travers, “Don’t you know that everybody’s got a Fairyland of their own?” It’s pretty obvious now that she was referring to the Wizarding World!

Fantastic Beasts: The Secrets of Dumbledore will be released in theaters on April 8, 2022 (we’ll be keeping our eyes peeled for a Mary Poppins cameo). In the meantime, you can enjoy Mary Poppins and Mary Poppins Returns on Disney+. Both movies are practically perfect in every way!

Do you think Mary Poppins is a witch from Hogwarts?