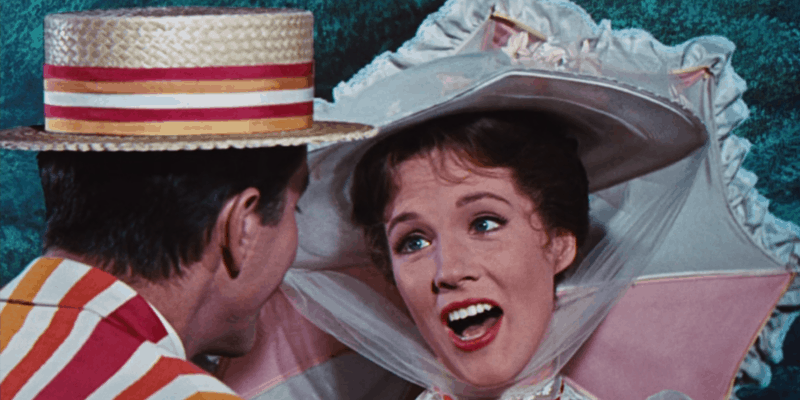 Last week, a theater producer came under fire after discussing the role of Mary Poppins in an interview that suggested some rather controversial views regarding transgender performers.

Since then, the producer in question has gone on to clarify his comments in a statement on social media; however, numerous transgender people, advocates, and allies took to Manhattan this week to hit back at not just the producer, but the theater industry in general.

Mary Poppins is perhaps one of the most recognizable and popular figures in Disney film history, largely due to Julie Andrews’s iconic portrayal of the magical nanny and Dick Van Dyke’s rogueish chimney sweeper, Bert. The fantastical adventures of Mary Poppins, Bert, and the Banks children, Jane and Michael, with unforgettable songs and breathtaking dance numbers make Mary Poppins a classic Walt Disney film.

In addition to her movie presence, Mary Poppins also became a star of the stage with both West End Theater and Broadway productions happening between 2004 and 2013. Recently, the Mary Poppins musical has returned to London’s West End, opening in 2019 and later reopening in August 2021 after being shut down due to the pandemic. The musical is produced by Cameron Mackintosh in collaboration with Disney Theatrical Productions.

It is Mackintosh who has come under fire for his comments regarding the possibility of casting a transgender performer as Mary Poppins. Per The Telegraph:

Discussing whether Mary Poppins, which returned to the stage at the Prince Edward Theatre on Saturday, could have a transgender twist, Mr Mackintosh explained that PL Travers’ tale “was not about that, that was not the story of that family”.

But Mr Mackintosh said that casting can match the subject matter, saying: “There are a number of shows that deal with that, like [Everybody’s Talking About] Jamie and things, not quite transgender, but people finding their true selves.

“I think if the material for the piece requires it, and it’s well done, that will be popularly embraced.”

Following the article’s publication, Mackintosh has faced backlash, ultimately leading to him issuing a statement on social media at the end of last month.

“I was recently asked by a journalist if I would consider making the character of Mary Poppins (not the actor playing the role) a transgender woman. Unfortunately, my answer has been misinterpreted to suggest that I am opposed to casting a transgender performer to play the role.

This is absolutely not true. I meant only that I would not as a producer disregard the author P. L. Travers’ original intention for the character. To be clear, whether a person is trans has no bearing on their suitability for any role of any of my shows, including Mary Poppins, as long as they can perform the role as written.

I’m very sorry for any distress caused by my remarks being misrepresented. Trans actors are welcome to submit and audition for any of my productions. What matters is what has always mattered: the talent and storytelling. I have long been and will continue to be a proponent of diversity and casting for my projects around the world.”

Now, a week after Mackintosh’s statement, the transgender community has marched on Broadway to demand change in the theater industry following the producer’s comments on “gimmick” casting.

“When I look out, I see so many beautiful faces,” Peppermint, the “Rupaul’s Drag Race” star and transgender theater actress, said before the gathered crowd Monday afternoon, made up of a few hundred members of the New York theater community. “Of the trans faces I see, I see actors, performers, speakers, writers and creators. And I don’t see a single ‘gimmick.’ What I see are opportunities, and it’s time that they—they who are in the business of Broadway—know it.”

Here, Peppermint is speaking about Mackintosh’s comments from The Telegraph‘s interview. The producer said:

“You can’t implant something that is not inherently there in the story or character, that’s what I think,” he told The Telegraph. “Just to do that, that becomes gimmick casting. It’s trying to force something that isn’t natural.

Almost 200 people joined the Trans March on Broadway with many members of the New York Theater scene attending and speeches from activists and advocates for the Transgender community worldwide taking place.

“What Cameron Mackintosh said only reflected his practices,” she told Variety. “He was telling the truth about what he thinks. He was giving us a signal that this is where he—where himself and every other casting director and producer in the business who I’ve ever experienced—stand.”

As of yet, Mackintosh has not issued any other statements in relation to the Trans March on Broadway and the comments made by members of the Trans community.