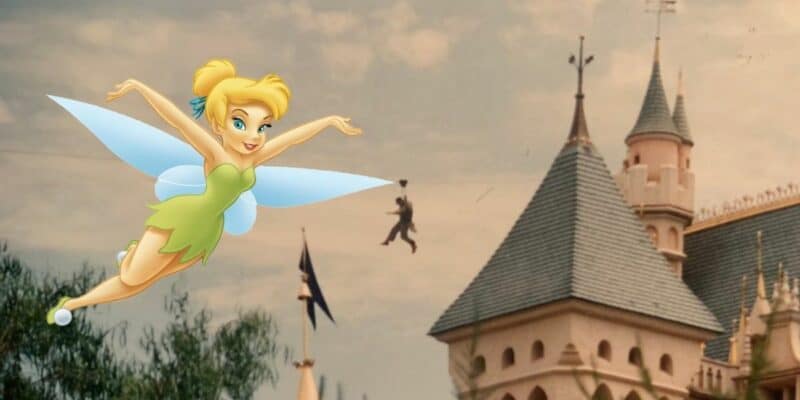 Built on orange groves in Anaheim, California, Disneyland has expanded over the years to include hotels, Downtown Disney, and, of course, Disney’s California Adventure.

With the Resort full of secrets, tidbits, and nostalgia, it’s always fun to learn something new about the Parks, including an Indiana Jones surprise throwback that many Guests might not be aware of!

From Rise of the Resistance at Star Wars: Galaxy’s Edge, to the brand-new WEB SLINGERS: A Spider-Man Adventure attraction at Avengers Campus and the classic Haunted Mansion, Disneyland has made magic for every Guest to experience since it opened July 17, 1955.

Over at Walt Disney World Resort in Florida, Guests can enjoy the new Disney Enchantment fireworks spectacular as the Resort continues to celebrate its 50th anniversary, while in Disneyland, Guests are dazzled by the “Believe…In Holiday Magic” Fireworks Spectacular on select nights.

With pixie dust and some Disney magic, Tinker Bell has been soaring over both Cinderella Castle (at 189 feet up) and Disneyland’s Matterhorn for years, sparking joy in all those watching the nighttime spectaculars.

The very first Tinker Bell “flew” in Disneyland Park in the summer of 1961, with Tiny Kline being Tink’s first friend flying high over Sleeping Beauty Castle on a cable. Kline was a pixie-sized 4’10”, 98 pounds, and nearly 70 years old at the time.

Later on, actress Gina Rock would become the longest flying friend of Tinker Bell at Disneyland Resort, travelling from the top of the Matterhorn during the nighttime fireworks for over 21 years.

The Peter Pan (1953) fairy didn’t fly over to Walt Disney World Resort until the mid-1980s, where she first was seen in a holiday show. Disney Guest reactions were so positive that she became a permanent star of the classic nighttime spectacular “Wishes” in Magic Kingdom for the next twenty years.

Well, in a surprise piece of Disney nostalgia, it seems Tinker Bell lost her starring role flying over Disneyland back in 1995 when Indiana Jones himself stole the show!

The Indiana Jones Adventure attraction premiered as Temple of the Forbidden Eye at Disneyland Park in Anaheim, California on March 3, 1995. A second, and nearly identical, version of the ride, opened in 2001 at Tokyo DisneySea in China, Japan.

Located in Adventureland, the ride was created with George Lucas after the success of Indiana Jones Epic Stunt Spectacular! at Disney’s Hollywood Studios in Florida, which is reopening December 19 after the pandemic forced the show to close.

Jones made a surprise appearance at Disneyland’s 40th along with his iconic bullwhip, fedora, satchel and leather jacket.

Oh you know, Just Indiana Jones going down the Tink wire, after being chased by the bad guys, all after climbing up the Matterhorn.
July 17th 1995 pic.twitter.com/Ozc8ygEvEf

Alea on Twitter also shared some fun images of Indy’s escapades, with the 40th anniversary Disneyland banner also being shown on the Matterhorn:

Disney Guest @johnvanwinkle commented on the photos of Indy swooping over Disneyland saying that he was actually there that special day. Apparently, Grammy-award-winning country singer Randy Travis sang “Happy Birthday” to the Park way up high on top of the Matterhorn:

I was there. It was an amazing moment followed by Randy Travis leading the singing of Happy Birthday.

I was there. It was an amazing moment followed by Randy Travis leading the singing of Happy Birthday.

“Disneyland will never be completed . . . as long as there is imagination left in the world […] I think Walt would be very pleased that his promise has been kept so far.”

One Disney fan, Matt Brewster, did make a valid comment, however, that by having Indiana Jones escape the “bad guys” down the cable, it destroys the illusion for Guests that Tinker Bell “flies” across the Park:

Doesn’t this remind everybody that there is a wire? Doesn’t that negate the illusion that Tink is really flying?

Doesn't this remind everybody that there is a wire? Doesn't that negate the illusion that Tink is really flying?

Unfortunately, those eagerly awaiting the release of Indiana Jones 5 now have a longer wait than anticipated. Disney announced back in October the theatrical delay of multiple upcoming movies, including an 11-month pushback on Indy from July 29, 2022, to June 30, 2023.

Were you there during Disneyland’s 40th anniversary celebration? Let us know in the comments!