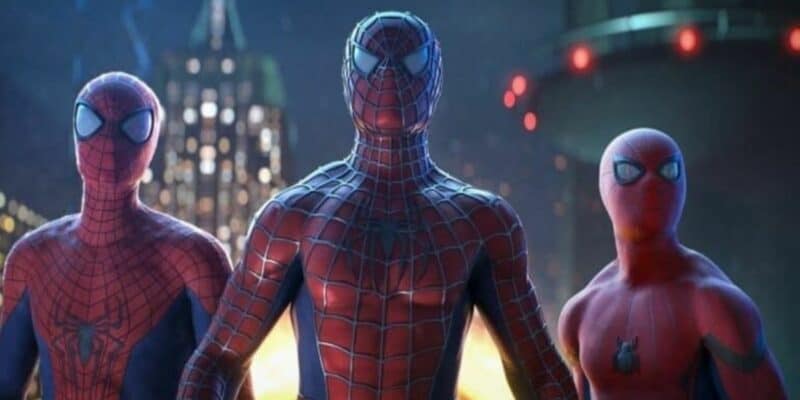 Marvel’s upcoming Spider-Man: No Way Home (2021) movie featuring the possible introduction of the live-action Spider-Verse is late to the game when it comes to promotional material. Besides a controversial teaser trailer, the Marvel movie is yet to release an official poster.

Now, some theaters across the world are using fan-made material, some of which contain potential spoilers for the film.

Every Marvel fan is betting that previous Peter Parker actors Tobey Maguire and Andrew Garfield are appealing alongside Tom Holland in Marvel’s New York as Spider-Man in No Way Home.

Given that the Sinister Six, including Alfred Molina’s Doctor Octopus and possible Eddie Brock/Venom (Tom Hardy), are making their way into the Marvel Cinematic Universe as the iconic characters mean the Multiverse is here.

The Marvel collection is rapidly expanding with each new superhero and Avenger, thanks to the events of Loki and even Avengers: Endgame (2019). No Way Home could be bigger than Avengers: Infinity Way (2018) and Captain America: Civil War (2016), and Marvel is taking any chances on ruining the movie.

Related: Tom Holland’s Spider-Man Replacement May Return to the MCU Next Year

However, some theaters are taking it into their own hands to promote the upcoming Marvel film with unofficial, fan-made posters that contain potential spoilers about the special return of a Marvel Character.

Movie theaters have begun to use fan-made posters to promote ‘Spider-Man: No Way Home’ due to an absence of an official poster.

In the post above, you can see Tom Holland’s character wrapped in Doc Ock’s tentacles. The other poster contains Tobey Maguire’s Spider-Man standing directly behind Holland’s.

In early September, a leak of the Spider-Man: No Way Home trailer nearly broke the internet, and following the event, Marvel fans witnessed the power that Marvel Studios holds in taking down “leaks.” While fan-made posters are unofficial promotional materials, it’s worthy to note that business people are looking to the general public over Marvel at this time to promote the new film.

After all, theaters are businesses, but using unauthorized work containing Marvel characters and Tobey Maguire’s Spider-Man is a red flag in the legal world.

Nonetheless, Marvel fans were quick to spot Tobey Maguire’s familiar Spider-Man standing behind Tom Holland in one No Way Home poster. Of course, this is not an official poster containing a massive element to the story, but the artist behind the piece of work could be onto something.