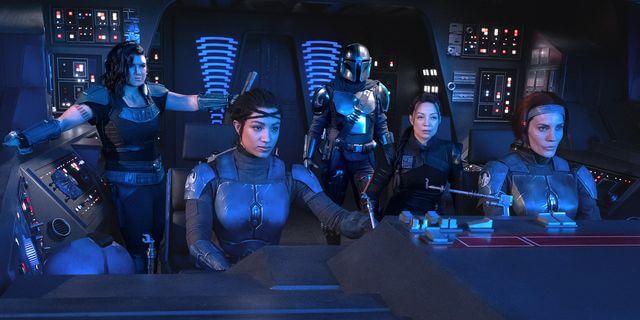 Over the course of The Mandalorian Season 2, Cara Dune actress Gina Carano — the daughter of NFL Dallas Cowboys quarterback, Glenn Carano — garnered a great deal of attention for sharing her social and political opinions on social media. Eventually, Carano’s controversial Tweets got her fired from the Star Wars franchise.

It’s worth noting that not all of the attention Carano received was negative — in fact, she still has a number of supporters who would love to see her return to the Star Wars universe as Nevarro’s New Republic Marshal.

Throughout the second season of showrunner Jon Favreau and executive producer Dave Filoni’s hit series, in fact, hashtags on both sides of the aisle — #FireGinaCarano, #WeLoveCaraDune, and #IStandWithGinaCarano — trended for weeks.

Now, however, it seems that Banks may have actually contracted the novel coronavirus.

According to a report about the developing situation:

Banks and [Bianca] Belair missed two consecutive WWE house shows due to “unforeseen circumstances”. WWE officials didn’t offer an official statement regarding the matter which caused a lot of suspicions online ahead of their SummerSlam clash. However, Bryan Alvarez of the Wrestling Observer speculates that Banks might have contracted COVID-19 and the company chose not to disclose it. Banks has been inactive on social media as of late.

At this time, the WWE Smackdown star’s vaccine status is not known, nor has Banks confirmed that she tested positive for COVID-19. It is also important to remember that there have been some Delta variant breakthrough cases even among vaccinated individuals.

Banks’s future involvement in The Mandalorian franchise is unconfirmed at this time, but since we know Bo-Katan Kryze (Katee Sackhoff) and Nite Owl warrior Axe Woves (Simon Kassianides) are both set to return to continue the Darksaber story arc involving Moff Gideon (Giancarlo Esposito) and bounty hunter Din Djarin (Pedro Pascal), Banks’s reappearance as Koska Reeves in The Mandalorian Season 3 or a spinoff series — like Ahsoka or The Book of Boba Fett — seems likely.

What do you think about Sasha Banks potentially getting COVID-19?