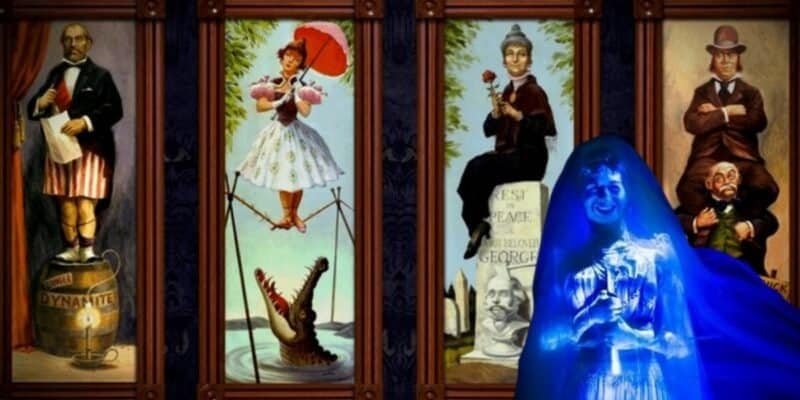 Is the Haunted Mansion film actually materializing? Or is it just your imagination?

The answer is, yes, it’s true! Disney is making an all-new movie based on the iconic Haunted Mansion attraction at Disney Parks. And now, it appears we may know exactly which ghosts we are going to see in the film. Are all 999 happy haunts set to appear (and is there room for one more)? Here’s what we know so far!

A new report by That Hashtag Show shares a list of the ghosts that Disney is looking to cast in the upcoming Haunted Mansion-inspired movie, per a recent casting call. Though Disney has not officially announced these specific details about the upcoming film, the report certainly has us curious about the news to come.

Here’s what That Hashtag Show shared today regarding the ghosts that we could see in the new Haunted Mansion film:

PRACTICAL GHOSTS
Casting for the following ghosts describes the roles as appearing throughout the film, but in a non-scripted capacity. They will also appear in wall portraits.

The Mariner: An older, weathered 19th century sailor. Gruff on the outside, but with a winning smile and an underlying warmth to him.

The Butler: Another Victorian era older gentleman, serving as the butler to a wealthy family. He’s described as a thin man with hollow eyes.

The Bride: A 30-something Victorian woman who’s gained a reputation for beheading her husbands a few times. (Okay, five times…)

Dueling Ghost: Pretty self-explanatory – a 19th century male ghost who participates in a duel. This one has a fairly open age range, with potential casting running from 30s-60s.

TALKING HEADS
Casting for the following roles specified they will take up the mantle of “talking portrait,” including a motion capture performance to be translated digitally. These come directly from the Disney ride, so you may have spotted their portraits before!

Woman with Rose: An older woman who may have played a part in her recent widowing…

Man in Dynamite Suit: An older bearded man preparing to take a formal picture… but he doesn’t realize the flash of light will be a bit more intense than expected.

Quicksand Man: Another one that’s pretty self-explanatory – a guy sinking in quicksand.

The Ballerina: A young and nimble dancer, anxious as she balances perilously above a creature below…

As we can see in the list above, Disney appears to be casting for some of the Haunted Mansion attraction’s most iconic characters, including Constance Hatchaway (AKA the Bride in the attic), the characters who appear in the stretching room portraits, and Master Gracey. Any die-hard fan of the Haunted Mansion ride at Disneyland Park at Disneyland Resort in California and Magic Kingdom Park at Walt Disney World Resort in Florida is likely pretty excited to see these characters frightfully brought to life (or…death?) on screen.

So far, little is known about the new Haunted Mansion movie. It was first announced nearly a year ago in August 2020, and since then we have heard news about the director (Justin Simien) as well as two major stars who are in talks to appear in the movie (Tiffany Haddish and Lakeith Stanfield). Still, Disney hasn’t announced much regarding the film’s plot or cast, so although the above reported casting call is certainly exciting, we’ll continue to wait for more official information to drop.

Click here to read all about the Disney Parks attractions that are inspiring new Disney films.

Are you excited to see a new Haunted Mansion movie made by Disney? Did you like the original 2003 film starring Eddie Murphy? Let us know in the comments!