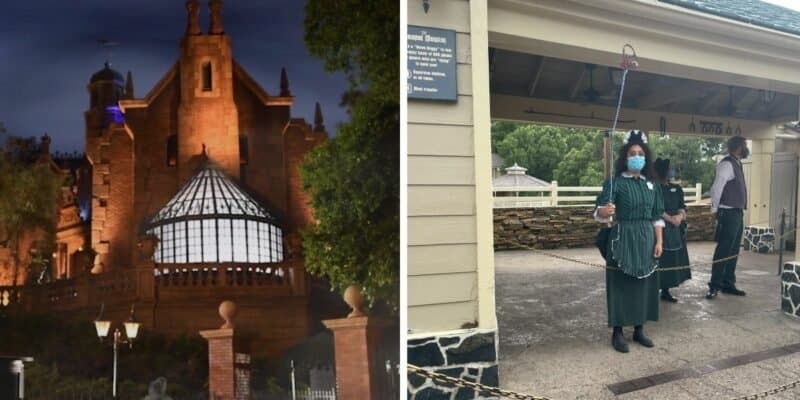 When Guests visit Disney World there is always so much to do and see that even on your 100th visit, you may pick up on a new detail or character that you have never seen before.

Disney World’s Haunted Mansion attraction at Magic Kingdom has a tonne of characters within the attraction. There are, of course, 999 happy haunts! One character that Guests meet early on in the attraction queue is the ghost horse. We can see that the horse harness is holding up as if a horse is there, but since the horse is a ghost, we cannot see him.

This awesome Imagineered illusion is one of many that Guests can expect to see when they enter the Haunted Mansion. It is actually an illusion used on another character, although he is a rare character that Guests hardly ever get to see!

I have been to Magic Kingdom countless times and can attest that I have only ever seen Nuggets, the ghostly baby giraffe, one time in my life. During a temporary closure this past weekend, Cast Members were standing in front of the attraction to let Guests know what was going on with the ride. Interestingly enough, we noticed that one Cast Member had a ghost on a leash!

The leash extended high up, signifying a tall animal, and had a very small nuzzle. We asked the Cast Member who the character was, and she told us that it was Nuggets, the baby giraffe (because if he were an adult, he would have been much taller).

To our dismay, they don’t feed Nuggets chicken nuggets, but he does have food in the mansion to eat. If you ever see Nuggets hanging around the Haunted Mansion, don’t be afraid to say hi! After a few minutes of chatting, we were even able to pet the ghost.

Have you ever seen Nuggets at the Haunted Mansion in Magic Kingdom? Let us know in the comments below!