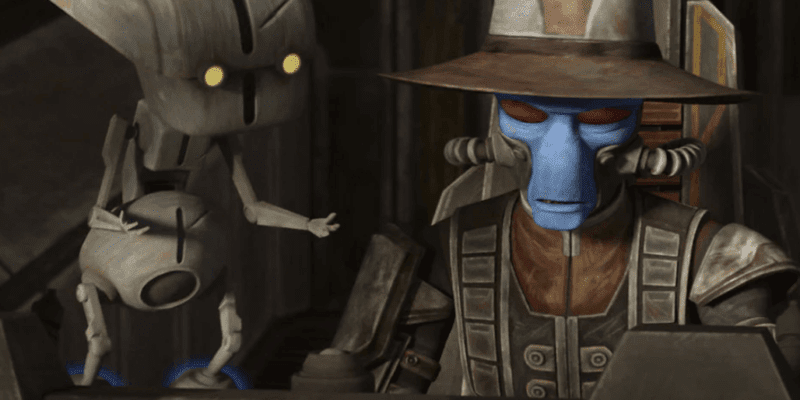 In the first episode (“The Aftermath”) we saw Clone Force 99 — Hunter, Wrecker, Tech, Echo, and Crosshair (all voiced by Dee Bradley Baker) — watch Jedi General Depa Billaba (Archie Panjabi) get killed by her own clone troopers.

All the while, her Padawan Caleb Dume — later Freddie Prinze, Jr.’s Kanan Jarrus in Star Wars Rebels — looked on in horror until Hunter helped him escape. Since then, chaotic adventures have ensued, with the elite squad of “defective” clones taking mercenary missions from Cid (Rhea Perlman) on Pantora to help make ends meet.

Most recently, bounty hunter Cad Bane (Corey Burton) has been back on the scene in Episode 8 (“Reunion”) and Episode 10 (“Bounty Lost”). Bane was accompanied by his trusty astromech droid Todo 360 (Seth Green).

Green — who recently spoke out about how his show Star Wars Detours, created with George Lucas, is likely to never be relased — first voiced Todo 360 in Star Wars: The Clone Wars. Now, he has shared details about potentially making his live-action debut in the Star Wars franchise.

Entertainment Weekly asked Green (Adult Swim’s Robot Chicken, Austin Powers, Party Monster, The Italian Job) if he would want to be a Jedi Knight, a bounty hunter, or another type of character altogether. He responded:

“Well, let’s look at me realistically. I know what the audience is going to buy. That’s the thing. You get a little bit of an earn with it, Star Wars, the way that Simon Pegg played a huge creature in a suit. You could get super-messed up and be built into a puppet in a chair and play something really exotic. That’d be fun too. Or Lupita Nyong’o played that character that’s entirely CG, even though she filmed it with the dots for the camera. So I’m not opposed to playing something. There just hasn’t been something that’s come up that any of the people who are making it, highly competent people obviously, have thought that I’d fit into. And I don’t really contest that. My greatest patience as an actor is knowing when I really love a director or a writer, not being a part of their vision isn’t a comment on my quality, and when the time comes, if it comes, I’ll be there.”

Although it doesn’t sound like plans are imminent for Green to play a live-action role in Star Wars, the actor and writer is clearly open to the possiblity — no matter what species Lucasfilm executives would like him to take on.

As for Cad Bane, there’s a very good possibility we could see him make his live-action debut in The Book of Boba Fett alongside Temuera Morrison’s iconic bounty hunter and Ming-Na Wen’s Fennec Shand, especially if that famous Clone Wars story arc actually plays out in The Bad Batch…

Would you like to see Seth Green in the Star Wars galaxy in live-action?