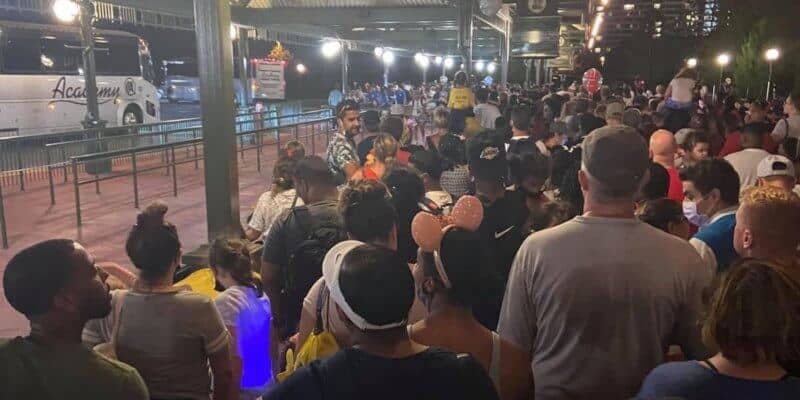 As fireworks continue to light up the night sky once again, it is clear that pre-pandemic crowds are also returning to the Walt Disney World theme parks.

Many Guests are sticking around until Park closing so they can once again witness Happily Ever After as a way to end their magical day at Magic Kingdom. However, with this being said, that means that a huge crowd of people will be trying to leave the theme park at once — causing a backup for transportation back to the Disney Resort hotels and the Ticket and Transportation Center.

With thousands of Guests all trying to leave the theme park at once after the fireworks end, the crowd build-up is bound to happen.

One Guest, who wishes to remain unnamed, told Inside the Magic that transportation at Magic Kingdom was a “nightmare” late Thursday evening. They shared these photos (below), where you can clearly see other Guests piled in near the bus stations at Magic Kingdom as everyone tried to get back to their cars at the Ticket and Transportation Center (or preferred destination) after the Park closed.

The Guest went on to tell Inside the Magic that they felt as though this experience was an unfortunate “nightmare” and did not see any Cast Members nearby. It is important to note that Minnie Vans are not running at this time, though other rideshare companies are available as an option for an additional fee.

The anonymous Guest expressed that it was “scary being at the mercy of Disney when the bus area seemed so volatile”. They did eventually get back to the Ticket and Transportation Center by taking a ferry boat; however, by the time they exited Magic Kingdom, it took them over two hours to get back to their car.

All in all, the Disney Guest really just wanted to shine some light on the situation and hopes that raising these concerns will help for future experiences at Magic Kingdom.

If you are planning to visit Magic Kingdom for the fireworks and are concerned about transportation, we have a few suggestions for you! First, if you really want to watch the fireworks but still want to ensure you get back to your preferred destination as efficiently as possible, try catching Happily Ever After from outside the Magic Kingdom instead! You can hop over to Disney’s Polynesian Resort for a beautiful view across Seven Seas Lagoon and then walk to the Ticket and Transportation Center from there once the fireworks end.

Or, if you prefer to watch the fireworks from inside Magic Kingdom, we suggest standing near Town Square rather than in front of Cinderella Castle. You will still get an amazing view and be able to see the entire show, but once the fireworks end, you will be one of the first Guests out of the theme park as Town Square is close to the park entrance/exit.

It is clear that crowds have arrived in Disney World as people cannot wait to once again soak up the magic of the theme parks as we continue to move forward with the pandemic. If you are visiting Walt Disney World in the near future, be sure to familiarize yourself with the current safety protocols as the theme parks have continued to modify the rules and regulations.