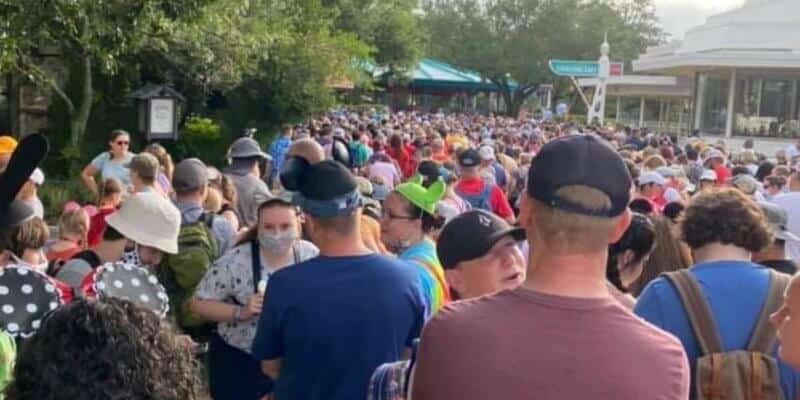 Families are eager to get back into the swing of things as summer is here and many are trying to make up for the loss of vacations due to the ongoing pandemic. With that being said, summer crowds have officially arrived at Walt Disney World as the theme parks — Magic Kingdom, EPCOT, Disney’s Hollywood Studios, and Disney’s Animal Kingdom — are welcoming large crowds these last few weeks.

And with the large crowds, and an increase in capacity at Disney World, pre-pandemic rope drop has officially returned to the theme parks.

Shelly Barger of Magic Pass Travel Co. shared a photo (below) of what the rope drop crowds looked like this morning at Magic Kingdom and it’s safe to say that the pre-pandemic procedure is back in full force.

Shelly explained that she and her family arrived at Magic Kingdom before the parking lot even opened and once they were let inside, these were the crowds to start the day. This photo was taken in the Tomorrowland area near Comic Ray’s Starlight Café.

This is not the first time we have seen large crowds gathered in the last few weeks. In fact, earlier this month we reported that EPCOT is once again drawing large crowds and long lines, which you can read more about here.

It is clear that summer crowds gave arrived in Disney World as people cannot wait to once again soak up the magic of the theme parks as we continue to move forward with the pandemic. If you are visiting Walt Disney World in the near future, be sure to familiarize yourself with the current safety protocols as the theme parks have continued to modify the rules and regulations.

Do you want to start planning your magical Disney World vacation? Our friends at Academy Travel are ready to help. Get started by clicking here!